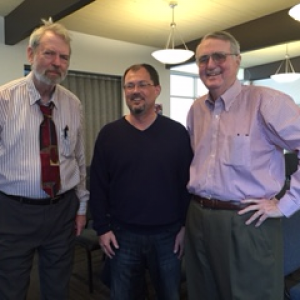 Following my reading at the Writer’s Center in Bethesda, Md., Sunday, I had a chance to catch up with Paul Hopper, left, whom I taught with at the Shenango Valley Campus of Penn State in the early and mid-1970s. He taught linguistics and German in Sharon, Pa., and has worked as a translator since then. Donald Baker, center, is a descendant of William Lewis Maury. Lewis Maury was a cousin of Matthew Fontaine and sat on the “plucking board” that forcibly retired Matthew Fontaine from naval service for a time. To show “no hard feelings” in wartime, Lewis, as he was known, commanded commerce raider CSS Georgia bought by cousin Matthew.