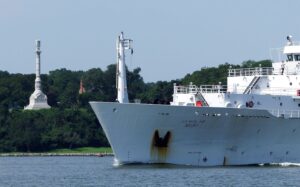 Bill O’Donovan’s picture of USNS Maury cruising past the Yorktown Victory column really struck a chord with me when I saw it today. I wrote a biography of Matthew Fontaine Maury that was published in 2015, and this oceanographic vessel was named after him. His statue on Richmond’s Monument Avenue has been removed; its fate unsure. The ship’s name is possibly in question as well. He resigned his Navy commission to side with the Confederacy during the Civil War. I wanted the book’s title to be: “Matthew Fontaine Maury in the Ruins of War.” The publisher insisted on “Matthew Fontaine Maury, Father of Oceanography.”
I caved — to get the book in print.
Yorktown has always been a very special place to me — even as a kid in Chicago. I always through of it as “This where it began,” meaning the United States. For three years, I drove through the battlefield going to and from work. I never lost the feeling, which I still have, of Yorktown being “sacred ground” in the war for independence. When we moved from Gloucester County, across the river from Yorktown to the Virginia Peninsula, we still lived nearby — to teach kite flying, to ride bikes, but still that very special place in American history. During this same time, I had the unique pleasure of coordinating my newspaper’s news, feature, and photographic coverage of the Bicentennial celebration that culminated along the banks of the York River.
President Reagan, but a few months after being shot; France President Francois Mitterand who had escaped an assassination attempt himself; representatives from the United Kingdom’s Royal Family; active-duty British forces whose lineage placed them in North America at the time but not in Northern Ireland at that moment; French legionnaires and soldiers from the Caribbean possessions; American soldiers from Fort Eustis, airmen from Langley AFB [though the air force played a minimal role in October 1781], Coast Guardsmen from the OCS school in Yorktown [A. Hamilton had other things to do that fall in Yorktown — like storm a redoubt]; sailors likely “plankowners” from ships being built at NN Ship and Marines most likely from Little Creek across Hampton Roads.
And then, there were the American war re-enactors, French legionnaires and soldiers from the Caribbean possessions; hundreds of other international, national, state, and, of course, local dignitaries; and thousands of spectators.
The same two narrow roads that led almost all these people in in would be the same two narrow roads that would lead them out.
Oh yeah, and there was no “river traffic” over the week leading up to Oct. 19, 1981. The river was filled with dozens, possibly hundreds of American, French, British, Canadian and a host of other warships from other nations.
[Imagine a gung-ho destroyer skipper asking the harbormaster: “Can I get through to the Weapons Station; need a missile load?’ “Sorry, You’ll have to wait your turn.”]
As long as I live, I will remember the fireworks over the Victory Monument the nigh of Oct. 19, 1981. It was as spectacularly wild as the best of any commemoration of the Fourth in Washington or any other city in the United States.
If I could have run Thom Slater’s picture that captured that intensity any larger than I did on the front page, I would have; but in print, there is a matter of space and pixels.
Thanks, Bill O’Donovan for capturing a “very special place” and a very personal place.
bicentennialbookfireworksFourthFrenchMauryMitterandReaganroyalSlaterYorktown
Share This
RECENT POST
CONTACT
703-250-4869
john@johngradynowandthen.com
If your organization is interested in having John speak at your event, please call: 703-250-4869 or email john@johngradynowandthen.com
CONTACT JOHN
© Copyright 2018 | John Grady | All Rights Reserved | Site by d2dcreative.com
Back To Top
×