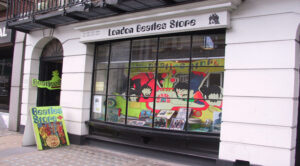 For several hours in below zero [celsisus] weather several years ago in London, I held “our place” at 221b Baker Street, the “home” of Sherlock and the good doc.

Across the street from the legendary dwelling is the Beatles store, where Lillian [of the generation that asked, “whose your favorite Beatle?] warmed herself.

Well, it turns out that 221b Baker [and we had to get a course correction from some construction workers to find it] is not owned by the “good Mrs. Hudson” but the offspring of Kazakh oligarchs.

You can’t beat that with a stick as the saying goes.

“Mr. Nazarbayev’s middle daughter, Dinara, and her husband, Timur Kulibayev, were each worth $3 billion before the recent unrest in Kazakhstan, according to Forbes, and they own the country’s biggest bank. His eldest daughter, Dariga Nazarbayeva, an amateur opera singer and politician, and her son own real estate in London worth almost $200 million. Their properties are said to include the house at 221B Baker Street that is the address of the fictional detective Sherlock Holmes.