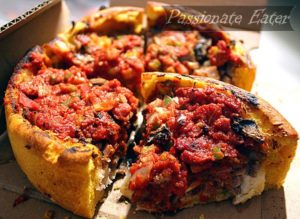 Carol Helstosky’s  “Five Myths: Pizza” was as welcome as Friday nights in millions of households in the United States or even memories of long-ago breakfasts — when much younger, left-over slices served at room temperature since someone forgot to cover the box and put in the refrigerator overnight.

Having read her wonderful book, published by the University of Chicago Press a decade ago — what other institution could send to the world such a classic, a fitting work in its academic history to my mind, I yearned again for Gino’s — not Gino’s East [on Superior, the east comes from its lakeward tilt away from Boul Mich and now other places — too chi-chi for a high school or college kid], but the haphazardly ready, graffitti filled, semi-clean, cash on the barrelhead — didn’t want to lose the margin between profit-and-loss by paying the credit card middleman — deep dish ambience of the city’s “Glitter Gulch.”

Sure, Uno’s, not far away, can claim the patent on deep dish; but Gino’s had perfected it — in a wonderfully Chicago way of exuberance.

Had “official” New York-style sort-of-thin crust slices in the spring, but longed to go back to my roots.

And oh yeah, the Safeway rising crust Supreme isn’t bad — not only on Fridays.