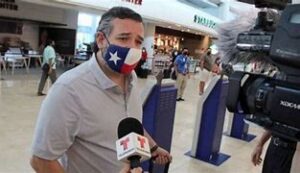 Having been born in Calgary, Alberta, home of the “Stampede,” the “greatest outdoor show on earth,” Ted Cruz had a lifetime of models to follow through this “crisis of conscience” brought on by “do-gooders” with cell phone camera.

I’m pretty sure none of these Texas [larger than life fictional, like much of the Lone Star myth] would never have headed to Cancun for a respite from cold and dark.

And they certainly wouldn’t have said this:

“Obviously a mistake” and worse yet, “in hindsight, I wouldn’t have done it.”

After all, Sheriff Ed Earl Dodd [played by Burt Reynolds in the movie] won a seat in the Texas legislature for winking and nodding about “The Best Little Whorehouse in Texas.”  Who really could cast the first stone at kind-hearted madam Mona [Dolly Parton in the film]?

Ed Earl’s and Mona’s longtime personal and business relationship was being exposed by the MEDIA — a Houston TV station.

Talk about “tough,” Burt and Dolly showed it.

And, you can ignore the vaccine donation but linger long over literacy, Dolly has a “good heart” in real life.

Being the constitutional scholar  and history-delver you are, as you demonstrated after the assault on the Capitol, did you check out Charles Goodknight’s  and Oliver Loving’s 1866 “inspired” cattle drive.  “Inspired” by them being flat broke with thousands of cattle to feed, on the wrong side of river at the wrong time with an army and navy between them and a “market,” and, worse yet, on the losing side of a war.

They punched those cattle first to the Navajo reservation [prison camp would be more accurate] at Bosque Redondo, New Mexico, and sold thousands of head of cattle there.  While Goodknight  took his share of the gold [not greenbacks and certainly not Confederate dollars] and headed down the dusty trail to home, Loving showed how “tough” he was.  He “pushed” the remaining cattle onto the rail head in Denver — “one long piece” away.

And certainly didn’t you  learn “toughness” and “character” from spending seven years punching cattle with trail boss Gil Favor [Eric Fleming] and ramrod Rowdy Yates [Clint Eastwood] in “Rawhide” from San Antone to the Missouri Cow Town Sedalia in countless TV re-runs . Every hamlet, village, courthouse along the Shawnee Trail was a test of “tough” and “character.”

And you must have been glued to the set [or read the Pulitzer prize-winning novel] that no show of “Texas tough” would be complete without those legendary retired rangers, Woodrow Call [Tommy Lee Jones] and Gus McCrae [Robert Duvall] knowing that Lonesome Dove on one of Texas’ borders could no longer support a cattlemen’s life by the late 1870s.

Talk about “tough.”  Loving ended his drive at Denver.  Call and McCrae moved their beeves “north of the Yellowstone” into the Montana Territory.

Who wasn’t “riding” with them through the mini-series, senator?

But maybe this “mistake” really was Ted’s “first rodeo.” After all, Princeton and Harvard can do that to you when you know it’s FREEZING in Harris county.

So we with tender hearts leave him with fellow Canadian Ian Tyson’s immortal “Someday Soon” about love triumphing over all when the “blow you ole blue Norther(n)” rolls out the “Alberta Clipper” dropping temperatures 30 degrees or more instantly.

Though this “clipper’ has seemed to stall.

Here’s the CBC video with Ian and his ex-wife Sylvia and Judy Collins to get Ted and the rest of us through another winter in Plague Year 1, Common Era.

As Collins said the royalties from the song “helped [Tyson] through a hard winter or two,” paying  for feed for his cattle.

Bonus track from another Canadian, Joni Mitchell’s “Both Sides Now” because in Ted’s case “friends have changed” for his “not really knowing life at all” in the dark, cold, and without water.

But then again, Cruz has “a big hat, no cattle.”