No one can doubt the “It’s All About Me” demeanor of the current president; and anyone who has heard, read or seen anything about Theodore Roosevelt would question the size of his ego — in or out of office — being at least Mount Rushmorian size.

But the contrast between President Donald Trump and Roosevelt couldn’t be more sharply delineated than Edmund Morris’ description of an incident in Colonel Roosevelt, the concluding volume of his biography of TR.

After speaking during a Sunday worship service to first-class passengers aboard a German liner returning to New York after his long safari in Africa, TR was concerned that those “huddled masses” — largely Polish Catholics — didn’t have a similar chance to worship.

“Let’s see if we can’t carry this righteousness down to the steerage people and the stokers.”

Escorted by the captain down into the depth of the vessel, more than a thousand Catholics had gathered around a makeshift altar with candles providing the light and German and American flags adding to the solemnity of the Mass and the passage from the Old World to the New.  Roosevelt asked the Polish priest to translate for him his wish “the adventure into the new land would be a turning-point in their lives” and “how earnestly he as a citizen of the great republic, welcomed them to it.”

As Morris writes, “Many in the congregation began to weep as these words were translated.”

Following a litany and the priest’s benediction, at least one girl kissed his hand and “others followed by the dozen, catching at his coat.”

On the third class deck, speaking “partly in German, he extended the same good wishes.”

The United States before World War I largely had open doors to immigrants — with some exceptions.

At the time, the federal immigration laws on the books:

excluded Chinese and restricted Japanese largely to Hawaii to counter the “Yellow Peril” fears on the West Coast of the 1870s onward;

then shouted absolutely “no more” to anarchists and their wannabes in 1901 after one of them killed McKinley and TR stomped into the White House;

Yet to happen were the choking off at ports or entry starting in 1917 because the “wrong kind” of Europeans — from Central, Southern and Eastern parts of the continent are fearing for their lives in a world war and suffering through its aftermath in the early 1920s.

Some context for the current president:

Frederick Trump — paternal grandfather of the president “chain-migrated” from Bavaria to the United States in 1885; but wait, there’s a hitch, he returned to Bavaria a rich man in businesses that raised moral questions then among the holier-than-thou evangelicals of the Pacific Northwest — brothels and saloons and the Canadian Pacific Coast. He married back there a woman he had known as a girl and, after being hounded by the government for conscription avoidance as a teen-ager brought his new wife, pregnant with their son and himself back to America in 1905.

As to how the grandparents might have achieved their United States citizenship and whether Trump’s father was an “anchor baby,” aka “birthright baby,” I suggest Kenneth Ackerman’s delightful Boss Tweed, (Falls Church, Va.: Viral History Press, 2011, paperback edition), 40, 52-58 (on Tammany Hall practices in dispensing citizenship papers to German and Irish immigrants — didn’t even need to take an oath in a federal court, state court, or anywhere else in the immediate aftermath of the Civil War, just sign or we’ll sign for you.  So the men could quickly vote or someone using that name could vote again. Reformers decried these citizenship and voting practices that continued until the turn of the century.)

Some context for what happened near San Diego:

Tear gas was produced about the beginning of World War I in 1914 to get around a Hague Convention prohibition on using chemical weapons in battle.  The French are believed to be the first to use it in combat. From creation, it was known be effective in crowd control and acceptable for use by civilian authorities, but taboo on the battlefield. [I consider that very strange, but hey].

Both times, Frederick Trump came to the United States and the time only his spouse immigrated there were no quotas, etc.  They cleared the extremely low thresholds of not being Chinese, lunatics and anarchists when they landed at Castle Garden [note: Castle Garden is now called “Roosevelt Island” and for all immigration buffs — nativists or otherwise, Ellis Island didn’t open as an immigration center until 1892; and surprise, surprise, it wasn’t the only one in the United States]. Oh yes, only under the Mariel boatlift from Cuba — and Fidel Castro’s follow-on  jail-emptying gambit, and desperate Haitians fleeing the island for South Florida did the U.S. begin detaining illegal entrants in large numbers.

And also there was no tear gas to keep the Trumps and other immigrants aboard the ships they came over on, instead of debarking. There were quarantine restrictions for all passengers, as well as customs and some other paperwork.

So to bring this all up to the present, one man, a former president, goes out of his way twice — in one day, granted it was a Sunday, more honored now for religious observance, to welcome migrants [and laborers] — too poor to afford much of anything in the two lowest classes of shipboard existence who couldn’t speak English.

And today, we have a president, certainly a product of “chain migration” in his grandfather’s first landing, who sends a reinforced heavy Army brigade [by numbers, not by military skills] to join forces with thousands of guardsmen to support [again by numbers only] a reinforced heavy division of Border Patrol agents along the southwestern border to keep out “rapists” and hold back  the caravanserai.

Crowd control tear gas was used to roll back the “invasion” of “stone cold criminals,” the current chief executive’s phrasing, on a Sabbath. Was it justified?

How much space is left on Mount Rushmore? 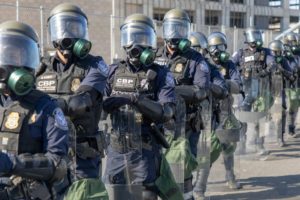