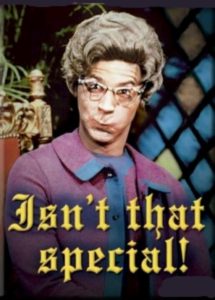 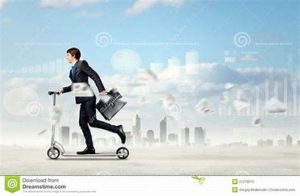 For several months, the Morally Correct Commuter has been silent — observing the ebb and flow of decorum and “following the rules!” on public transit, most often Metro rail; and what is happening on our streets — always be leery of cyclists who think red lights mean pedal faster and yell;  and now, on our sidewalks — the attack of the middle-aged male scooter riders.

Often, the Commuter has to ask himself: “What would the Church Lady do” under these trying circumstances?

But first a well-deserved kudo to Metro Rail and the University of Maryland bus shuttle system.  Let it be known, far and wide — at least in the Statistical Metropolitan Area — that it is possible to move with alacrity from the far reaches of Fairfax to the clutches of the Former Byrd Stadium.

[The term for the University of Maryland’s football arena is  similar to the terms necessarily used for other important points of geography. Almost are familiar with the “Former Yugoslavia,” which the commuter has been in several times, and the “Former Soviet Union,” for which the commuter, although never having been physically present there, received this nation’s “Red Badge of courage” for holding  its hordes in check.}

But the Commuter digresses.

Yes, this miracle was accomplished in 90 minutes — for a football extravaganza; both ways, it is important to say.  Ninety in; 90 out. Garage to car to parking to Metro Rail, one transfer in the deepest underground of the District and then from the College Park Station to a stop maybe a hundred yards from the stadium entrance.

Easy, peasy! — as the British commercial for detergent concluded triumphantly in the 1970s.

With SNL’s “The Church Lady” by my side — with her old person’s reduced fare card in hand, the Seventies had been her halcyon years, we have witnessed a “shocking, shocking” increase in the amount of liquid consumption on the trains.  This is true in the 3000 and 6000 series cars and the 7000 series.

The “no drinking” sign with the other prohibitions remain posted — in stations, in rail cars, on buses; but standards have slackened.  Violators of all ages, genders, races and ethnic origins  are sipping surreptitiously [for now, as the Church Lady noted] coffee, soft drinks, et al. during the daylight hours.  The occasional wine bottles — almost always small — surely had to be the residue of darker, more clandestine hours.

The Commuter and the Church Lady are wondering why transit police with the Yellow Line mute have not cracked down on this rise of prohibition flaunting.

Tip to the watchful and the authorities from Dana Carvey:  The sipping most often occurs in the tumult of passengers exiting and entering!

Now onto to the more serious matters of public safety.

The commuter, having exited the DuPont Circle Metro Station, and crossing with the green light and “little white man” showing the way, was TWICE almost run over by cyclists, speeding into the turn in their lanes, in recent weeks, ignoring me and one woman with a baby buggy the first time and the second time me and a handful of other pedestrians entering the bicycle lanes.

And no, the Commuter was not staring at his phone or any other handheld device or talking on it or conversing with anyone, but looking ahead into the park in the direction of “think tank alley”  and glancing up at a distant clock — both times.  The first time, the cyclist to avoid mom and baby slightly, nicked me on the Achilles and screamed to the three, counting the baby as a person, “get the f … out of the way.” It was a little after 9:30, technically not in the 9 to 5 rush. The second, not to be outdone — and separated by a month or so from the first cyclist incident — started screaming “move it, f…..s” and “you a..h…s” sending the small group of walkers either scurrying forward to the park or back to the island between the car and bike lanes as he raced into the turn shortly before 8:30, so technically in prime traffic time — on the roads, on the sidewalks, at crossings.

The Commuter is an advocate of bike lanes; and know more than a few personally who bike to work in every kind of weather.  A salute to them; and a bow to the cyclists who follow traffic law and common sense.

But it is as routine as automobile drivers in suburban cul-de-sac subdivisions ignoring Stop signs, but posting yellow — sometimes pea green — plastic figures with “Slow” or “Children” ensigns near their curbs to shame drivers to keep within speed limits as to see cyclists ride into vehicular traffic — not with it, ignore one-way street signs, pedal through stop or yield signs and treat red light traffic signals as advisory only.

And the Commuter is not talking about the declining number of “Bike Messengers” or kids, but most often riders going to and from work.

It is more than a grain of salt on my lips that the Commuter hears on news outlets in Washington how cyclists are at the mercy of auto, truck, van, SUV drivers when they pay little or no heed to traffic indicators.

Need further visual proof of cyclists of whom might be in danger: check any crossing of the W&OD cycling/walking trail with streets or Pennsylvania Avenue from the Newseum back toward Trump’s hotel almost any day or at any time.

So the question is again: What would the Church Lady do?

Now for the phenomenon of the rent-and-drop anywhere Urban Scooter, brought to my attention by the Sam LaGrone, editor of USNI NEWS, in his role as parent and pedestrian in Richmond months earlier. The Commuter’s first real experience with them on a sidewalk came on a blustery Sunday in late October near the Treasury Department on a sidewalk.

The scooter — best described as powered “Razors” — was “aimed” by a mid-teen boy through a red light on multi-lane New York Avenue and into a knot of pedestrians either heading to church, the Women’s Museum or brunch [where we were headed — and not at the Ebbitt Grill].

OK, that was just one unguided missile — a Scud, so to say.

And all cards on the table, the Commuter has tried out a Segway — in a convention center, on an exhibit floor where there were plenty of sellers, buyers and the curious.  Like the mid-teenage boy, the Commuter and Segway escaped unscathed,  so did exhibitors their displays and unwary gawkers from that venture.

The commuter came away convinced it was an excellent invention for police, possibly tourists in a group — as long as they stayed on the “American side” of the road, not the U.K.’s or Japan’s or other nations following that custom.

Fast forward to post Thanksgiving weeks in Washington, with the sun actually shining — setting records for rainfall in 2018 so it was a memorable occurrence, the Commuter, having ridden Metro rail, was on 15th Street heading toward divided K Street, “power gulch” with influence peddlers, wanna-be influence peddlers, self-important not self-critical personages of inflated ego by the boatload.

Along comes a dress-for-success late 30s white male, fashionable chamois-colored topcoat, dark pants with cuffs, clearly seeing himself rising on the escalator of success, within reachable clawing of “master of the universe” status, riding his Urban Commuter Scooter , weaving in and out of the lunchtime sidewalk traffic.

Not even a “by on your left” or “by on your right” or “get out of the way;” think the shared paths along the Potomac for those necessary pieces of advice.

Having read — on printed newsprint, that speed limits are capped for these scooters, the Commuter still thought “what an a……” Why? There were bike lanes on the street. You’re not in a motorized wheelchair; you’re not disabled, old, or under 10; get on the street, go with the flow.

Lo and behold, Mr. Climb-the-Rungs of Hucksterism as one of the Babbitts of politics, not governance, and the Commuter are going to the same building, but — fortunately, not the same floor, as it turns out.

He has left the Big Dogs’ Razor at the door and in the lobby, spots a peer, white male and aged the same — give or take a year or two, similarly dressed — but this one has on a dark knotty textured overcoat, almost looking like a black persian [not Iranian; have sanctions against those spreaders of terror] lamb toy I had as a child.

What do they talk about?

What the Commuter remembers?

“The sidewalks are great; you don’t have the congestion of the bike lanes.”

Oh great! Pedestrians be aware of able-bodied men on scooters.

The Morally Correct Commuter had been crushed in the word game.

What would the Church Lady say?

With a frown, she might raise a middle finger to the crazed cyclists or grab-it-all scooter riders.

With an index finger, she might bring it to her mouth for the sneaky sippers.