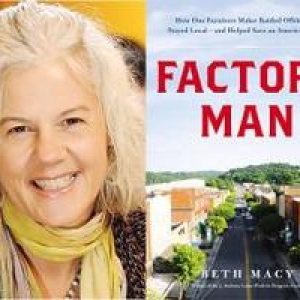 Beth Macy is a reporter for a newspaper in Roanoke and is working on a third book.

Tips on recognizing the differences between writing a biography or non-fiction narrative and even long-form newswriting and marketing what you have written from sessions at Bio 2016 conference in Richmond.

Beth Macy: The author of Factory Man said her subject, a member of the Bassett family, a one-time furniture giant, comes from an area of Virginia best known for Bluegrass music and barbecue, but went on a one-man crusade to find evidence that China was dumping furniture into the American market to drive U.S. companies out of business.

“The family was land rich and cash poor” for generations before the dumping case.

She said she wondered how she would structure the story and discovered “It’s just not it’s like one long newspaper piece.”

In her job as a journalist in Roanoke, Virginia, there was little need for “signposting” or “how to tease what would happen. …[In a book] it’s all about the content.”

Her book had “the benefit and horror of [writing about] somebody who’s still alive.”

Macy said she asked herself, “What would Robert Caro do” when she came to writing about a scene involving  a fistfight in the family that no one wanted to talk about.  Her answer,”find the ambulance driver” who took away one of the combatants and was paid $100 to remain silent for decades.

“Create expectations and fulfill them” but “it doesn’t have to what they expect.”

Macy said there are two approaches to this: approaching it as what will happen next or mystery.

“You’ve got to know what your story is.  This is my story; this is what I’m going to highlight.” The writing is in a long arc with “small arcs in it.”

Debby Applegate: The author of The Most Famous Man in America: The Biography of Henry Ward Beecher said she was “not a natural story-teller,” so she asked herself “what is it I have to do make this readable?”

She said in her work she is looking for cause and effect, free will and the “intimate, aggregate and the ironic” and their interplay

“What really am I trying to do?” Make the reader “turn the page” and “wonder what’s going to happen next” and bring it to “provisional resolution” on every page.

“Conflict in an of itself is not a narrative arce” but it can provide a means to finding the “saving grace” in a character to bring that person to life.

Macy: “Digress often, but not too long.

Applegate: “I’m a big fan of tell less” with a strong point of view and “keeping it narrow on actions.” This is “giving [readers] just enough … to know.

Stiles: “Reader must be invested in the story.”  He added, “I’m not above cheap tricks to do this,” but “everything has to serve the story, serve the work, serve the reader” and “carry them forward” into a fully realized world “where people do make sense.”

Macy: In her newest book, all the documents on the kidnapped orphans who are the subjects of the work were written from a racist point of view.

A difference between journalism and biography is in building a narrative.  She used the example of re-creating the neighorhood of the orphans by interviewing survivors from the period who lived there, driving around with them to “bring the neighborhood alive” by “finding the telling detail.”

Launching Your Book: Marketing and Promotion:

Bruce Tulgan: The founder of RainmakerThinking and the author of Managing Generation X said his background first lay in political campaigns and authors should treat promotion like a campaign and “use that to build a platform on myself.”

“Have a clear message.  Who’s your audience and you have to communicate that message to them through many channels.

Unlike a political campaign “it never ends.”

Where  20 years ago reaching an audience could be cumbersome — faxing, the “internet made this much easier.” It’s free and his company moved from weekly information send-outs by fax to three times a week to now using social media.  “You can reach a critical mass” through the internet and social media.

“The more you do” to promote the book, “the more [the publisher] will do.”

“You have people fall in love” by sending out free materials from your written work, so “buy extra copies.”

“Carve it up in chunks.  Here’s something for free.  You want them to fall in love.”

When a writer has settled on a topic, the question is “why does anyone care about this?”

Work on finding an appealing title [packaging including blurbs], and realize the need for an editor.

By seeking blurbs from even potential reviewers, it buys an author a “round of protection.” Get reviewed in Kirkus, Publishers Weekly and Booklist.

In the campaign plans, “what is it your trying to sell?  Define and find your audience.  In the content plan by writing this book “what does this make you an expert of” beside the subject of the biography

“You can create your own syndication.”

“Look for multipliers” to create an upward spiral of recognition of you and your work.

Build your own email list because you “want to hit influencers.”