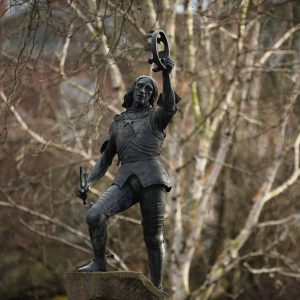 In June I returned from a Richmond conference with a list of books on writing to either buy or check out of the library.  One was Paul Murray Kendall’s on The Art of Biography, mentioned by several speakers.  Frankly, I knew nothing about Kendall, a scholar of the Renaissance who died in 1973. l did the usual Google search and then ordered the book on biography.  I loved it, marked it all up, and put the work in an easily accessible place for quick reference or inspiration.

Among Kendall’s other works was a biography of Richard the Third, whom I really only knew from Shakespeare’s trashing and the year-old news story of his remains being found in a Leicester parking lot. I thought, I will give the Richard book a shot.

In one extended paragraph on the year 1483 when Richard took the crown and throne, Kendall ties in Thomas Wolsey, future cardinal and chancellor of England, then ten, and Thomas More, future lawyer and chancellor, then five; Copernicus, fascinated by the heavens, as a schoolboy; Michelangelo, Raphael, and Niccolo Machiavelli, all teen-agers in Italy; Erasmus, “stuffing his head with all the learning he can find” at seventeen; Lorenzo the Magnificent dominating Florence politically and culturally but losing the services of Leonardo da Vinci; and Martin Luther being baptized as an infant Roman Catholic.

copermicusda VinciErasmusKendallLutherMacchiabelliMichelangeloMoreRaphaelRichard the ThirdShakespeareWolsey
Please Share This
RECENT POST
CONTACT
703-250-4869
john@johngradynowandthen.com
If your organization is interested in having John speak at your event, please call: 703-250-4869 or email john@johngradynowandthen.com
CONTACT JOHN
© Copyright 2018 | John Grady | All Rights Reserved | Site by d2dcreative.com
Back To Top