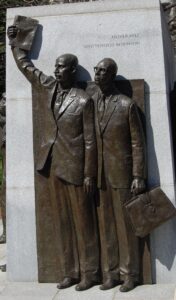 John Lewis, C. J. Vivian, Joseph Lowery
And Spottswood Robinson, Oliver Hill
I am ripping off the title of Margaret Edds’ magnificent book on the long, bitter, and painful struggle to desegregate Virginia’s public schools.
As the lives of Lewis, Vivian, and Lowery showed, the “victory” that Robinson, Hill, Thurgood Marshall, and the NAACP Legal Defense and Education Fund won in federal court case, after federal court case didn’t equate into “Simple Justice.”
Sticking only to Virginia to make that point — after borrowing Richard Kluger’s two-volume title.
White Virginians, even if they lived through the late 1950s as school children in Norfolk, Charlottesville, Warren County, et al., ignore the state’s most lasting 20th century legacy — “Massive Resistance.” No other state created and employed the mechanisms to close elementary and high schools rather than integrate them — clear defiance of the Supreme Court’s “Brown” decision in 1954.
“All deliberate speed” translated into the Harry Byrd machine’s “never.”
I am hardly a First Family of Virginia, having “immigrated” from Pennsylvania in 1976, the “Bicentennial Year.” My first wife, a daughter of a career naval officer, lived through the shuttering of Norfolk’s high schools and middle schools rather than have them comply with the Federal District Court order. When the public schools were closed, they enrolled her brother in a private school. She wasn’t affected because she was too young.
Why?
“Massive” meant massive. Make the federal district courts decide each level of education in every school district.
In Norfolk, that meant 10,000 kids’ schools were closed in a game of chicken between the sitting governor Lindsay Almond and Norfolk’s mayor — Byrd men to the core [at least for the moment in Almond’s case] and one of those Eisenhower-appointed Republican judges, Walter Hoffman’s ruling to admit 17 African-American students. [You can add the Navy Department to the federal side in this matter.]
To put the icing on the “massive” Virginia cake of “never,” the legislature approved having the state subsidize private — read white or almost entirely white — “academies.”
That certainly provided an “out” if the district complied with those “radical” judges like Hoffman or Alabama’s Frank Johnson, George Wallace’s classmate.
Obey the ruling in Virginia, the state cut off the aid.
Today, monuments to the “Lost Generation” of public school students in Prince Edward County and the lawyers who argued their case through the federal courts — Robinson and Hill — stand on the Capitol grounds in Richmond, but a short walk from Byrd’s on the same grounds and but a few miles from Monument[less] Avenue.
The Prince Edward public schools were closed for years, not weeks or months, as was the case in Norfolk and other localities. To add salt to that wound, their case had been wrapped into what became the “Brown” decision.
Standing in the “schoolhouse door,” as Wallace did, meant a university’s admissions office in Alabama, Mississippi, and Georgia. Those states left K-12 alone.
If you think all of this is the hoary past, school districts in Virginia were still arguing in federal courts when my daughter entered them over desegregation rulings and guidance.
We have seen the re-segregation of public schools nationwide — de facto, long after she began her own family.
The Voting Rights Act of 1965 has been gutted in the Congress and the federal courts — long after the deaths of Hoffman, Johnson, and others named to the bench by Ike, whom the GOP no longer likes.
2020 has been a landmark year in many ways — not for the good. The “better angels” that I hear so much about never came down from wherever or flew by in the breeze– as far as I know, feel, and certainly see.
Maybe along with Bob Dylan, we won’t have to wait for the weatherman to see “which way the wind blows” in November since we’ve revived the “culture wars” of the Sixties — guys with guns and all, on state capitol grounds in Richmond, and Lansing.
“Liberate Michigan, Liberate Minnesota, Liberate Virginia.”
Guess it depends upon your definition of “liberate.”
I’d ask Lewis, Vivian, Lowery, Robinson, and Hill for its meaning.
ByrdEddsHillHoffmanJohnsonKlugerLewisLoweryMassive ResistanceRobinsonschoolVirginiaVivianWallace
Share This
RECENT POST
CONTACT
703-250-4869
john@johngradynowandthen.com
If your organization is interested in having John speak at your event, please call: 703-250-4869 or email john@johngradynowandthen.com
CONTACT JOHN
© Copyright 2018 | John Grady | All Rights Reserved | Site by d2dcreative.com
Back To Top
×