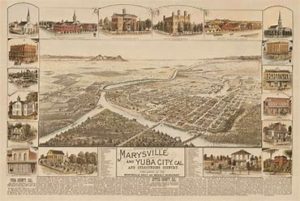 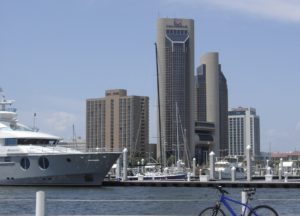 Yep, on the front page of the Post were datelines that I recognized from earlier lives:

First, Yuba City, Calif., for a story “After hell comes homelessness” about the Camp Fire forest fires raging near Beale AFB, Calif., where I was stationed shortly after the Wright Brothers proved “man can fly” and maybe a decade or so after there was “Gold in Them Thar Hills.” And yessirree, Bobby, there was an assay office in the Wells Fargo branch on base.  Placer mining was still continuing in the Sierra on Beale, home to the SR-71 Black Bird spy plane and a wing of B-52s,  and dredging for gold was licensed in the American River.  Of particular note very shortly after I left was the conviction of Juan V. Corona in the machete deaths of at least 25 migrant farm workers whose bodies were dumped into shallow graves usually on or at the foot of the levees.

Second, Corpus Christi, for a story headlined “In Texas district attorney’s office, a tattooed tilt to the left.”  Although I had been stationed in the Sacramento Valley where Spanglish was common, it was here, the home of my first wife, that I received a heavy dose of telenovelas — decades before Univision.  As Anglo as some Texians in this part of South Texas liked to think Corpus was, it always had a very large Hispanic population.  If I recall correctly, most of the Tejanos were in place before Zach Taylor and the Army of Occupation came and stayed in the mid-1840s.  Wonder if current occupant of 1600 Pennsylvania NW took a leaf from the “Young Hickory” when he dispatched thousands of “my troops” to South Texas to defend the border. I am betting Steve Bannon would have to explain “Young Hickory’s” connection to “Old Hickory,” whose portrait hangs in the Oval Office so 45 could be in on the joke. The tatted DA is a biker, a Democrat and Tejano. Oh well.