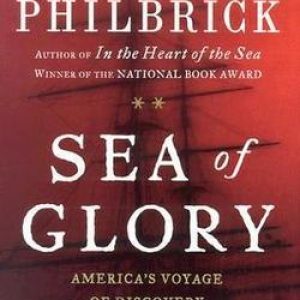 Portrait of Charles Wilkes about the time he commanded The South Seas Exploring Expedition.

Nathaniel Philbrick’s “Sea of Glory: America’s Voyage of Discovery”  should be on every commander’s reading list and also in every business and government schools’ syllabus.

The work is every bit as valuable and pertinent today as when it was published almost about 15 years ago. I stayed away from it when it first came out because I was working on a biography of another figure in this ongoing [melo]drama

While this book should be read for the firsts and the discoveries of the four-year expedition commanded by Lieutenant Charles Wilkes, it is more importantly a text on toxic leadership — in and out of uniform, disastrous political infighting over whether even to undertake the expedition [almost a decade of squabbling across five Congresses on Capitol Hill, the White House into  three administrations, the Navy Department from its secretary and  Board of Commissioners on down seemingly to the lowliest passed midshipmen and the egos of dozens of “scientifics” from the emerging new class of aesthete “natural philosophers.”

And all of this is taking place before heading to sea.

All this also  is going on while not having settled a basic question, what do you want to accomplish over what period of time if and when you ever leave port.

Second question unanswered: should the “scientifics” even be aboard.  The junk the will be collecting takes up space on cramped warships. These are Navy ships after all, not merchantmen.  Navy priorities, first, foremost and forever.

Oh yeah, to get to sea at long last with far fewer “scientifics” aboard than originally planned and still fuzziness in orders and timetables, the secretary of War, not Navy, chose the commander — Wilkes, who had little time at sea, much less as a skipper of ship and none as a commodore of a squadron.

A novelist couldn’t make this story up.

Although Wilkes was raised by an aunt and saint [not kidding], Elizabeth Seton, he was known as the “Stormy Petrel,” which gives the tar brush to seabirds. His pettiness, petulance, pretensions and vindictiveness reached epic heights almost as soon as the small squadron set sail.

When it was over: Imagine court-martial after court-martial, technically a fifth administration in office [although William Henry Harrison’s month-long tenure boosted the number] uninterested in what the expedition discovered and a Congress unwilling to pay for publication of its findings and a number of “scientifics” totally incapable of putting down on paper their findings even if money were available.

To top all that, Joseph Henry, the secretary of the newly-launched Smithsonian, had zero interest in running a museum of any sort.  From his humble and hardscrabble background, he  wrapped himself in a Princeton [aka College of New Jersey] academic gown as a pure researcher.  He only wanted the new institution engaged in that labor.  If Henry were alive today, he would have purged all universities of any students but post-doctoral fellows. [I wonder if his statue on the National Mall has its eyes closed to shut out all those museums across the grass and to either side. He would have been appalled — at least when he first took office, then he found out that money could flow from Congress if, say, a museum of some sort, popular with taxpayers, etc. You get the idea.]

Yet despite all the bullying, hubris, hatred and self-serving actions and writings — toxic from top to bottom over and long after the voyage, the long-delayed great “South Seas” exploring expedition had more than its share of successes.

Here are a few: eventually proved Antarctica was a continent, charted large sections of the Pacific Ocean, solidified the United States’ claims in the Pacific Northwest, mapped important lands in Oregon and California and  brought back to Washington a rare and extensive collection of flora and fauna that became the backbone of the Smithsonian Institution’s natural history collection.

The first question for discussion is how did the good to great achievements survive the bad to horrendous leadership.

Long ignored after his return to the United States, Wilkes was a proven martinet and known to be rash to the point of recklessness. In the Civil War he almost launched a shooting war between the United States and  Great Britain when he ordered the forcible removal of two Confederate commissioners and their secretaries from mail packet Trent on the high seas.

An immensely popular move in the North and reckless beyond imagination. Lincoln chose to fight one war at a time — against the Confederacy.

By the end of the Civil War, Wilkes was a flag officer.

The second question for discussion how did Wilkes rise in leadership positions with all that baggage?