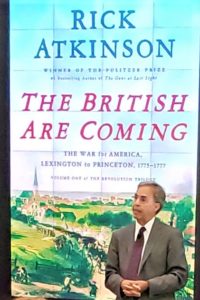 Rick Atkinson, author of the British Are Coming, said at the Association of the United States Army and Army Historical Foundation’s Lemnitzer Lecture as polarized as the country seems now “we have overcome bigger perils before.”

At the Arlington, Virginia event, he reminded the attendees as flawed as the Founding Fathers were “we cannot let that heritage be taken away” in what they accomplished in the Revolution and the establishment of a democratic republic that has survived for more than 230 years.

To underline that point, Atkinson, a Pulitzer Prize-winning author, quoted Nathaniel Greene in a letter to his wife following the debacle at Fort Washington near the northern founded tip of Manhattan where more than 2,800 American soldiers were captured and the Continental Army was forced to escape into New Jersey.

“Be of good courage.”

Like his previous work on the United States Army in the Europe during World War II, the British Are Coming is projected to be a trilogy.

For more, here is a podcast interview with Atkinson before his lecture.