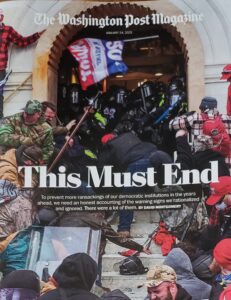 So said Texas Republican Louie Gohmert as he two-stepped around the metal detectors set up in the Capitol during the week following the “living in the moment” mob rained mayhem and threatened violence on anyone charged with carrying  a congressional constitutional duty.

Gohmert wasn’t alone among Republicans in expressing outrage over having to disarm before entering the Capitol and maybe even in the House Floor. In fact, these ranks are growing.  In running for Congress, did they surrender their Second Amendment Rights?

In that long-forgotten era, Jan. 6, 2021, when sham patriots, white supremacists, and “the curious” entered [“stormed,” depending upon political slant] to sight-see and  take selfies or hang the Republican vice president and kidnap or murder the Democratic Speaker of the House and “others.”

Bet Louie could round up at least 100 fellow GOP members who joined him in his to the bitter end [yet to come] of “Stop the Steal” in getting rid of the detectors where they are concerned.  The would be reverting to the “good ole days” when men were men [now we add women to the mix] and armed to the teeth in the pre Civil War Congress.

There’s even a book to help them “plot” their way backward.

Joanne Freeman, in her presentation at the National Book Festival in September 2019, cited the extreme polarization of political opinion during the three decades she concentrated on for her book “The Field of Blood.”  This time, like that era in the pre-Civil War United States, is one of “splintered parties” and filled with “conspiracy theories.”

Like 21st century America, it was also an era of “instant communication” through the invention of the telegraph, a comparable revolution to today’s internet. that was coupled with the rise of the mass circulation daily newspapers filled with stories of events brought almost instantly to their offices across the wires, putting them in similar position to social media.

When asked by a member of the audience what explained the violence of that time from election rioting and brawling to race riots, but also now, she said “once you ‘other’d’ another American” the dynamics of the situation have changed.

And boy, have we succeeded in that area under 45.

Of course, there are ebbs and flows in eras of tolerance and intolerance, rioting and order, mayhem and tranquility. Freeman noted how the Northern congressmen after the Civil War refused to be intimidated as they had been for years by Southern representatives constantly threatening violence by brandishing pistols, and, on occasion, turning to it by throwing over desks, wielding fists, canes, and other objects to bludgeon an opponent.

Instead of knuckling under to former Confederates attempting to be seated as representatives post Appomattox, who were determined to restore their pre-war order of badgering and threatening havoc on Capitol Hill to gain their way, the Union men denied them admission and launched congressional Reconstruction.

The price of re-admission for all the former Confederate states but Tennessee was passing the Thirteenth, freeing the slaves, and Fourteenth Amendments, guaranteeing citizenship, and setting the stage for the Fifteenth, guaranteeing the right to vote for African-American men.

The “You Can’t Stop Me” crowd is in the ascendancy.

I don’t see how this ends.