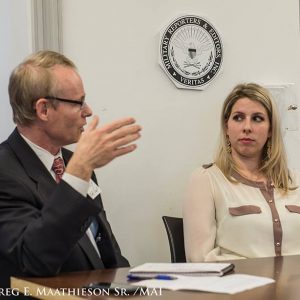 When you go to a conference there are always a few surprises and chances to learn new things, Friday’s Military Reporters and Editors gathering Friday in Arlington, Va., was no different.  Margaux Ewen’s with Reporters Sans Frontieres discussion with John Donnelly of Congressional Quarterly on safety of journalists in conflict and non-conflict zones was one of those surprises and learning times. The surprise, to me, were the number of journalists killed in Mexico, putting it in the top five most dangerous countries.

I expected to hear Iraq, Syria, Yemen. Even though I try to follow events at least close to the border, having in the past often gone to El Paso [one of the safest cities in the United States] on business and visiting family in southern Arizona, the level of violence by the drug cartels against journalists was disturbing.  I wasn’t surprised to hear that the Scandinavian countries were the safest with the freest press.  I expected the United States to be at least ranked in the top 20 for freest.  It came in at 41st out of more than 190 nations in its rankings, and this was before the current president began calling journalists “enemies of the people.”

Here are links to its website and its handbook of safety tips for journalists.