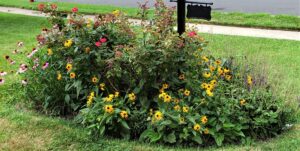 The Susans Have Taken Over; the Preakness in October
The Punch at Pimlico; And the Song Will Be …?
The horse that wins the Preakness Stakes usually run in May is given a garland of black-eyed susans for its victory in the second leg of the Triple Crown.
The flower, however, is firm believer in the hot weather of mid-summer and not cool, damp spring. The sidewalk view in the front and driveway view from the rear shows their success in the far reaches on Fairfax as we passed more than 10 days of 90-plus Farenheit.
Because of the pandemic, the race date was moved to early October, this time past the susans’ strongest suit. Of course, that will not stop attendees at the Baltimore track — if there are any — or viewers in their homes from downing “Black-Eyed Susan” punch, the “Free State’s” answer to the mint juleps of Kentucky.
Now we get into the “heritage,” “political” part of this horse race [without getting into the question of racing horses at all, gambling, drinking, et al.]
Maryland adopted the “Free State” nickname in 1864 when its new constitution abolished slavery. The Emancipation Proclamation didn’t apply in its borders since it was not in armed rebellion. [Others would point out it was occupied by federal armed forces and its rules trumped civil law in crucial areas of personal liberties.]
But another question arises when it comes to the state song and whether the Naval Academy’s Glee Club again will lead the crowd in “Infield Fest” in singing “Maryland, My Maryland.”
The song, written as a poem by a Georgetown University attendee [not sure he graduated] in spring 1861, bemoans the “northern scum,” the federal troops who secured the “Old Line” state to the Union. They did it by massive presence and martial law first in Baltimore and then Annapolis.
The riots that marked Massachusetts volunteers march from one station to another set the train in motion to clamp down on “Charm City” and divert Benjamin Butler to Annapolis to make sure neither the governor nor legislature decided to vote for secession.
The Massachusetts militiamen were sent to defend Washington after the Confederate attack on Sumter and Virginia’s vote for secession.
If Maryland went with the Confederacy, Washington was surrounded. Before a hasty purge in late winter 1861, the district’s own militia forces tilted toward secession.
The nine-stanza song , melody is “O Tannenbaum,” is as pro-Confederate an anthem as can be imagined. You can easily compare it to the Robert E. Lee Monument still standing in Richmond, as that “heritage.”
Maryland’s legislature has been weighing its fate for years, but don’t expect a change before this fall’s race. A special session to consider the song or any other but extreme emergency legislation in the wake of COVID-19 is highly unlikely.
The legislature adjourned the 2020 session in March.
So, for now, as the words go: “Thou wilt not yield the Vandal toll,
Maryland!”
The “Vandal” in this case is Lincoln, aka “tyrant” and “despot,” also in the lyrics, and referring to the same historical figure.
There the matter of the state song since 1939 rests as the “susans” take over the front in summer 2020.
As for the punch/cocktail, you start with vodka and rum and build from there. There are some fruity things added — to reduce changes of scurvy.
The roses in the far reaches of Fairfax are poised for a comeback.
AnnapolisBaltimoreConfederateFree StateMarylandOctoberracingrosessusans
Share This
RECENT POST
CONTACT
703-250-4869
john@johngradynowandthen.com
If your organization is interested in having John speak at your event, please call: 703-250-4869 or email john@johngradynowandthen.com
CONTACT JOHN
© Copyright 2018 | John Grady | All Rights Reserved | Site by d2dcreative.com
Back To Top
×