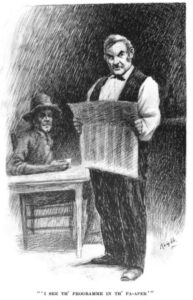 “That’s the beauty of iliction statistics — they’re not burdened with annything like facts.  All a man wants is a nice room in th’ back iv a Chinese laundrry an’ a long full iv hop an he can make a monkey out iv the’ la-ad that wrote th’ arithmetic. He sees majorities grinnin’ through th’ transom an’ roostin’ on th’ top iv th’ be an’ crawlin’ up his leg. …

“Is th’ campaign over because somebody with a banjo in his ear has been around larnin’ how th’ lads at th’ ribbon counters ‘r goin’ to make their ballots?  I want to ell ye, me frind. that no sthraw vote, no,nor enogh if thim to make a stack, is goin’ to tell how this thing will ind.”

[as in Barbara C. Schaaf, Mr. Dooley’s Chicago, (Garden City, N.Y., Anchor Press, 1977), 246-49. [As attuned 21st century American citizens we are ALL aware of the rampant fraud that attends to ANY elections that allow the mail to carry ballots forward and very likely EVERY location that accepts “drop-in” ballots. All that harkens back to those SAD days when barrels of cider and whiskey, kegs of beer, thugs with bats and guns stood around the polling table as white men of all sizes — but over 21 — shouted out their preferences.  Now we have a party, totally committed to secrecy and sanctity — from medical reports on CERTAIN hospitalized people down to filling those pews on Easter Sunday with the FAITHFUL in a pandemic —  missed 2020 but gunning for April 4 in Plague Year 2, Common Era.  As the party leaders shouted loud and clear in the courts of the “Badger State” this winter, “Lines, brave souls, lines; no masks required, under their breath they whispered — five government-issued ID,  all with pictures and signatures.  As we are seeing in Texas, the leading Lone Star in the heavens, now again, to the lines, on a November day; set standards — secrecy and sanctity add a dash of “rule of law” — and the right people mark ballots. So to ensure that and public health, polls open at 10 a.m.; close at 11 a.m. No one admitted after.  If not inside, try again in four years.]
ciderdooleydunneelectionlinesmasksright peoplerule of lawsanctitysecrecyTexaswhiskey