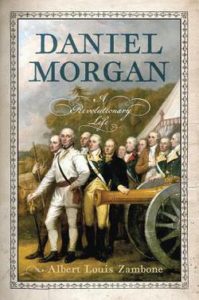 Throughout his life as a frontiersman, a soldier of exceptional courage, and a leader of disparate troops in skill and experience during the Revolution, and as an ardent Federalist, Daniel Morgan remained “purposely vague about his origins,” his most recent biographer said in a recent presentation at Morgan’s namesake graduate school in Washington.

Having run away from home, either in New Jersey or Pennsylvania, even that is not clear, Morgan “burned all his bridges” arriving in Winchester, Virginia, essentially a vagrant and illiterate.

Albert Louis Zambone said that by the mid-eighteenth century Virginia, particularly the Tidewater elite viewed the colony as the “fourth kingdom” of Great Britain. England, Scotland, and Wales being the other three.

Where Morgan eventually settled, eastern Frederick County, residents, frontiersmen in some ways, saw their connections and interests more aligned with that the colony’s elite on the eastern side of the Blue Ridge Mountains. Unlike other sections of the Shenandoah Valley, with its mix of Quakers, German dissenters like the Moravians, and other white arrivals from Pennsylvania, they were slave owners and considered themselves members of a hierarchical society. Many of them were the younger sons of Tidewater plantation owners.

Morgan learned quickly, being an ambitious young man that “you need friendships to advance” in this kind of society. He was a tough man, “got into a lot of fights,” had a reputation of being a brawler with a fiery temper that led to his flogging for insulting a British officer during the French and Indian War.

Zambone, in an e-mail response to questions about the book, said James Graham, Morgan’s first biographer in 1858 and great grandson-in-law, didn’t produce a hagiography that protected his subject’s reputation and family’s interest.

But he, on two occasions in Zambone’s mind, hedged his writing.

The first “was Morgan’s life of drinking and brawling. There is much moralizing about this–and, hey, he wasn’t wrong to suggest that perhaps Morgan might have had a more productive life if he hadn’t drunk so much rum or spent so much time pounding other men into the dirt. Nor did he [Graham] use Frederick County court records to discover the extent of Morgan’s bad behavior.”

Working from hundreds of pieces of Morgan’s writing and personal records, Graham, who was not a university-educated historian, Zambone found the account “careful” to the facts, not a “Parson” [Mason Locke] Weems flushing out his life of George Washington with apocryphal stories

Although Morgan’s later was known for his quick-thinking under fire as a soldier and thought-out tactics as a commander, in the Revolution, Morgan was a teamster in his first war, working alongside the British in Major General Edward Braddock’s disastrous march into the Pennsylvania wilds and mountains. He later fought in Lord Dunmore’s War, the last British campaign in North America before the Revolution.

Zambone said like many of his contemporaries in Virginia Morgan entered a common-law marriage; but also during this stage of his life, he began acquiring land, a mark of success in Britain and also in Virginia. Surprisingly enough for his time, Morgan “also learned to write as an adult.”

That combination of land ownership and literacy allowed Morgan to vote and opened the doors to active militia membership and service as a captain in Lord Dunmore’s War — Britain’s last colonial war before the Revolution, and his becoming a road surveyor, furthering his lifelong interest in “internal improvements,” a position solidified in his Federalist political beliefs that he carried into the Congress.

Now a rising figure in Winchester, with a large number of its residents and those from the surrounding counties supporting American claims of being capable of deciding for themselves on taxes and defense against those of Parliament and the Royal Lieutenant Governor Dunmore, the de facto government of the Committee Safety appointed him commander of its rifle company to be sent as one of the first ten units of what became the Continental Army.

Morgan, in the “Beeline March,” as the five-hundred mile trek to Massachusetts came to be called, “combined speed and discipline” in ensuring his ninety-eight men arrived in Cambridge to trap the British in Boston in 1775, the year before the Declaration of Independence.

Whether George Washington knew Morgan from Braddock’s march is not known, Zambone said; but he did selected his fellow Virginian to command the 11th Virginia in 1777.

Zambone noted that as a commander, “Morgan believed in continual skirmishing to train his soldiers” and also in route marching “to build unit cohesion,” as occurred with his relentless pushing Winchester rifle company. He also had the good fortune to serve under two of the most able American commanders in the war — Benedict Arnold [twice] and Nathaniel Greene, who used Morgan’s talents to the Americans’ advantage in crucial moments — such as Saratoga and again at Cowpens.

But even with his commitment to the Revolution and independence and success as a subordinate commander at Saratoga, Morgan was passed over for promotion and resigned his commission in frustration. He could also justify the action on more personal grounds .Unlike Washington, who employed overseer to keep his large estate functioning during the war, Morgan and most other officers and men had no one to look out for their families while they were away.

“Farms needed to be maintained;” and so men left for a host of reasons — some disputing rank, enlistments were up, etc., Zambone said.

Returning to active service, under Greene, certainly during Cornwallis Southern Campaign in 1781, Morgan came to a full understanding of how in America “the military is subservient to the political civilian authority” and does not try to create a government. This was a lesson preached and practiced by Greene throughout the war, Zambone said, citing letters to his wife driving that point home.

Zambone said in answer to a question that Morgan as a commander of regular forces had a unique ability to “talk to militia as equals” and how to employ to their strengths as he did at the Battle of Cowpens. He also used them as security forces near their homes, “patrolling roads and watching Loyalists,” giving his volunteers more freedom of action.

Zambone, later in his presentation, noted Morgan’s interests in “internal improvements” also extended to canals after the war to allow the faster and more economical of shipment of produce from more rural areas like the Shenandoah to villages, towns, and burgeoning cities who, in turn, shipped back goods — from furniture to clothing to books. This became especially true after the Revolution when Morgan, protecting his own financial interests and the 125,000 acres awarded him in the Ohio Country for his military service.

Through it all, “Morgan remained an American nationalist — believed in a United America;” and when push came to shove after the war, he stood fast for a federal government under a constitution rather than a loose confederation of independent states. Under the new government, Morgan eventually served in the Congress and was appointed a major general to suppress the Whiskey Rebellion in Washington’s second term.

Zambone, in the e-mail exchange, admitted being fascinated by Morgan since he was a boy. ” As a ten-year old Don Higginbotham’s Morgan bio was the first historical monograph I ever read. Amazing that I slogged through it, but I was Morgan obsessed, since I first read bits and pieces about him. I went as Daniel Morgan for Halloween, and was deeply disgusted that no adult knew who he was…weren’t adults supposed to be smart and well read? So this bio is in many ways a 40 years late response to ignorance and indifference.

“Of course when I came to him again, now as a historian of the Colonial American South, I found that there was a lot more to think about and integrate with Morgan’s life: the creation of the Southern backcountry; social and cultural mobility in a hierarchical society; internal and commercial improvements; political culture in the early Republic; etc. All of these things, and more, can be found in Morgan’s life.”

As to how this interest became a book-length project, Zambone said in the email:

” My agent Roger Williams was at a conference, and heard multiple members of a panel say that Dan Morgan was long overdue for a biography. He leaned over to Bruce Franklin, editor and publisher of Westholme, and said “If you want to publish a bio of Dan Morgan, I have the guy to write it.” Then he texted me, and I immediately said yes.”