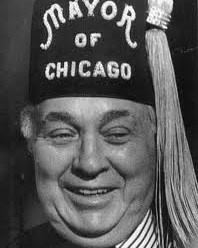 When I read 45’s Tweet in the newspaper — “when the looting starts, the shooting starts,” I believed he was quoting “The Man on Five,” the Pharoah himself, Richard J. Daley, from whom all blessings once flowed — my patronage summer job trimming trees.
I was so wrong.  45, a day before being sequested in the White House bunker, was quoting a “small-time” Miami police chief.
No, Hizzoner, always a man with words for the occasion, although five days after the rioting that convulsed the city following Martin Luther King’s murder, issued his famous order from the City-County Building to the “City of Big Shoulders'”police:
“Shoot to kill arsonists” and “shoot to maim looters.”
Certainly Duh Mare set the tone for “the police riot,” as it was called by a now-forgotten “Blue-Ribbon” panel describing what happened before and during the 1969 Democratic Convention. It has entered media anniversary accounts and history paragraphs as    alternately [like Bull Run/Manassas] “The Battle of Michigan Avenue” aka “The Battle of Grant Park.”
Oh yes, the 1968 chant on Michigan Avenue, in Grabt Park and in Lincoln Park before that, was “The Whole World Is Watching,” maybe so, maybe not.
In the case of the cell phone video of George Floyd’s plea, “I Can’t Breathe,” the whole world not only could see, but hear.
https://www.chicagoreader.com/chicago/shoot-to-kill—shoot-to-maim/Content?oid=908163
45Chicagoduh mareFloydGrant ParkhizzonerkingMiamiMichiganmurderpoliceriot
Share This
RECENT POST
CONTACT
703-250-4869
john@johngradynowandthen.com
If your organization is interested in having John speak at your event, please call: 703-250-4869 or email john@johngradynowandthen.com
CONTACT JOHN
© Copyright 2018 | John Grady | All Rights Reserved | Site by d2dcreative.com
Back To Top
×