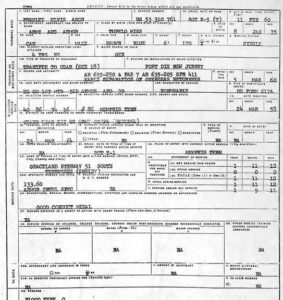 To call the military’s administrative discharge procedures “capricious” would be an understatement — recognized by the VA, General Accountability Office, and occasionally federal courts. The Pentagon’s ability to “brand someone for life” with “a bad paper” discharge — not through its judicial system, but its “administrative” personnel action system –has again drawn judicial attention asking “what the hell’s going on here.”
So here we are wrestling over issues that should have been remedied in the fallout from the Vietnam War [and probably before that].
[https://www.nytimes.com/…/army-veterans-discharges…]
While up to 100,000 service members likely hold “bad papers” from these “endless wars” — some through the military justice system, but more through “administrative” measures, that number pales in comparison to the havoc-wreaked during the Vietnam-era when employers demanded to know “draft status” and a copy of discharge papers —
the DD-214
[Sgt. Elvis’ shown here, please note Good Conduct Medal]
Vietnam Veterans of America pegged “bad papers” at 900,000 for that war. Gordon Hamilton’s 2017 book nailed the lifelong impact on Vietnam-era servicemembers from these “bad papers.”
I have been writing about the impact of these discharges for almost a half century on men and women who, in many cases, should never have been brought into the armed services — for a host of reasons, were suffering from various forms of trauma — before and during time in uniform, abuse of medications, erratic behavior and language towards
superiors etc.
[You can add homosexuality, possession of small amounts of marijuana, and other similar “offenses at the time” to the list as reasons for the “administrative” boot out the door.]
[https://johngradynowandthen.com/the-less-than…/…]
Yet here we are in 2020, where a federal court in Connecticut is again saying in a “settlement,” Big Army fix this mess. [The same will undoubtedly be pressed either in suits against the other services or by the services simply throwing up their hands and agreeing to a similar settlement over what’s “fair and equitable.”]
The larger questions remains — will the review panels right the wrongs and will Congress demand the services overhaul its administrative discharge system?
So DoD — for all your power points on Second and Third Order of Effects on any action — lay out all the cards and show how this system promotes “good order and discipline” in the ranks without cascading through the larger civilian society for lifetimes?
The “wash” from The Vietnam era is largely over — the survivors are too old [likely except for VA medical care] or dead.
And even though VA has told Congress repeatedly it has changed its “ways and means” of judging eligibility for care, like the services, it’s really the same old story.
“Good order and discipline” translates into “rules and practices.”
https://www.militarytimes.com/…/va-should-already-care…