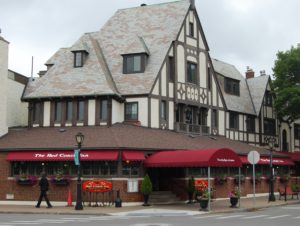 If as a fugitive slave you could make it as far as the Cataract House [approximately on the site of today’s Red Coach], there were a number of free blacks working at the resort hotel who provided the shelter and guidance for the final crossing to freedom. [Photo taken inside the Underground Railroad Heritage Center at former U.S. Customs House in Niagara Falls, N.Y., with permission].

The way across the river was the Suspension Bridge, now gone but crossing on foot is still possible for a fee, up river from the falls. The lower deck of the 19th century bridge was a pedestrian/ vehicle thoroughfare while the Grand Western — and later other rail lines when gauges were standardized — used the track on the upper level to cross into British-controlled Upper Canada. A rallying point on the other side was the train station with service westward to Hamilton and Toronto and connections from those cities to Windsor across from Detroit or toward Montreal and Quebec and further eastward into the Maritimes where many blacks had established themselves and new communities after the British withdrew from New York, particularly, following the Revolution.

Confederate spies, saboteurs, and couriers used the same route — with different hotels, but same train stations and bridge — to take the war north after the surrender at Vicksburg and defeat at Gettysburg.

Niagara Falls was also a “peace site” in the eyes of some war-weary Northerners. They begged, pleaded, cajoled, and twisted arms to open talks to end the war after three long years and no quick end in sight.

Woeful because of their outcome, half-hearted on the part of the Lincoln administration — facing re-election difficulties and doomed by no points that could ever be agreed upon by Washington or Richmond before talks began “peace negotiations” were “conducted” at Clifton House on the Canadian side at the instigation of editor Horace Greeley in the late summer 1864.