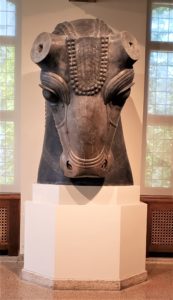 For decades, I have loved the Oriental Institute on now blocked-off 58th Street on the University of Chicago campus. What an eye-opener to ancient Mesopotamia, Persia, and Egypt.

After all, this was long before the fictional UC professor Abner Ravenwood trained the young Indiana — for the screen — in the mores or archaeology.

Of course, at the time of my discovery, I didn’t think to question how they arrived in Chicago in the first place [and yes, there were pictures and descriptions of the “digs.”] and even now, like the Elgin Marbles in the British Museum wonder if they should still be in Hyde Park.

A matter for other people, the findings are on display in a building overshadowed by a 20th century adaptation of European Western triumphalism.

The irony of the institute itself being in the shadow of Rockefeller Memorial Chapel, a Gothic edifice endowed by a Baptist larger than many medieval Roman Catholic cathedrals, has amazed me almost from the first time I stepped inside.

To be honest, I first discovered it when seeking shelter in a thunderstorm while trimming trees on nearby Midway Plaisance. The fancy-named street, part of the World’s Fair White City in 1893 is really 59th Street.

Nevertheless, I returned with Lillian to see what Chicago’s “Indiana Jones'” had carted back — without a “Lost Arc.”

For a wonderful mystery, centering on the OI — to those in the know, see Sara Paretsky’s “Shell Game,” published in 2018.