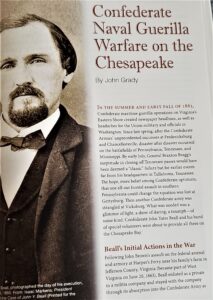 Hijacking passenger steamers, overpowering schooner crews, et al. had begun before First Bull Run/Manassas on the Potomac River. By 1863 reeling from defeats at Gettysburg, Vicksburg, and Tullahoma, the Confederates stepped up their guerrilla war on the water in the Chesapeake Bay. All the while, they were also looking at ways to strike terror into northern Great Lakes cities — from Buffalo to Chicago and liberate thousands of Confederate prisoners held there.

In this issue of Civil War Navy, I look at John Yates Beall’s Confederate Coast Guard’s “piracy” of Union shipping on the Bay, destruction of a lighthouse, and raids on land. After he was finally captured of Virginia’s Eastern Shore, he was more determined than ever to take the maritime guerrilla war to the Great Lakes.

What he did there set off a firestorm between the United States and Great Britain, but he was lessons he learned in Virginia that proved vital on the Lakes.