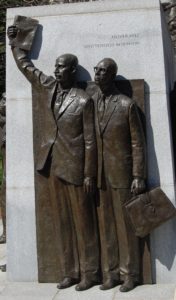 [The image is of Oliver Hill and Spottswood Robinson, the two attorneys who spearheaded the Virginia case that was packaged with “Brown.” Their statue and one to the Prince Edward students is on the Capitol Grounds.]

To understand Virginia’s political division over Confederate monuments, it’s not simply about statues and monuments.

You don’t have to return to the post-reconstruction re-taking of the state government by former Confederates or the “Lost Cause” mythologizing of the 1890s to 1920s to find an answer as to why voiced pain runs so high.

Look back no further than the 1950s and scan forward well into the 1970s for an answer that resonates more poignantly today than “men on horses.”

The answer lies in the commonwealth’s school houses, as Laura Vozzella wrote about in today’s Washington Post.

Under Sen. Harry Byrd’s whip, no other state executed laws to close public elementary and high schools rather than comply with federal court orders following the “Brown vs. [Topeka] Board of Education” ruling.

In its simplicity, the Supreme Court unanimously held “separate was not equal” for school children. There also was no timetable beyond “deliberate speed” to carry out the ruling not only in the South but large sections of the Midwest.

[The image is of Oliver Hill and Spottswood Robinson, the two attorneys who spearheaded the Virginia case that was packaged with “Brown.”

Their statue and one to the Prince Edward students is on the Capitol Grounds.]

The Virginia mechanism to block integration was cutting off state support to local districts if they complied with court orders; and the state did just that.

The laws backing “Massive Resistance” held for two years, but that did not lead to black and white students attending class together anytime soon.

The struggle in Virginia and federal courts over local school plans went on well into the 1970s over “busing” or as it was more often called “forced integration.”

And there are echoes of it today in schools seeking relief for decades-old court orders on how they are to provide “equal” education to their students.

That pain remains; and is captured in this excerpt from a story today.

[Democrat State Sen. Mamie ]Locke began forcefully, but soon paused, took a deep breath into the microphone, and tried to carry on. “In the 1950s,” she began again. Another pause. She rested the mic on her chest. Her seatmate, Sen. Louise Lucas, D-Portsmouth, patted Locke’s shoulder and urged her to go on. “C’mon,” Lucas said quietly. “C’mon.”

But Locke was done, for the moment.

“I think you all are witnessing the pain that some of these monuments inflicted on Virginia’s black community,” Sen. Jennifer McClellan, D-Richmond, said. “When you don’t talk about trauma, it doesn’t go away. It simmers until it can’t be held back anymore.”

McClellan noted that many of the state’s Confederate monuments went up right after Reconstruction, as “a backlash to the social, economic and political rise of the black community.” Others, she said, rose as the state resisted Brown v. Board of Education.