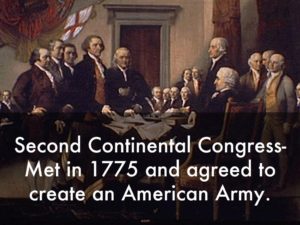 After the bloodletting at Lexington and Concord, and the capture at gunpoint of Ticonderoga and Crown Point in the wilds of New England, in Philadelphia, the second Continental Congress struggled to  find “the ways and means of raising money” to pay for whatever eventuality arose in Massachusetts, the Grants [present day Vermont],  Canada, and possibly in Virginia. Beyond the embargo rather than a “Declaration”  to “take up arms” what might work when the twin doubts of sustaining actions in the North American colonies and London bowing to pressure remained was a mystery.

Nevertheless, the Massachusetts Provincial Congress, being pressed to its limits militarily in Boston and supporting the seizure of Ticonderoga, was imploring the assembled colonies in Philadelphia for relief against “the sanguinary Zeal of the ministerial army.” In a message carried to Philadelphia by Paul Revere, President Joseph Warren told the delegates to the Continental Congress that Massachusetts would raise more than 13,000 militiamen to the cause, and he expected New Hampshire, Connecticut, and Rhode Island to step forward with more volunteers.

Bluntly put, Warren wrote, “we are now reduced to the sad alternative of defending ourselves by arms, or submitting to be slaughtered.”   The only light shining at this moment is “we have the greatest Confidence in the wisdom and ability of the Continent to support us, so far as it shall appear necessary for supporting the common cause of the American Colonies.”

As gathering heat and humidity  lay heavy on the city, stifling in the close confines of the hall, Samuel Ward, a wealthy Rhode Islander planter and one of those rare birds as a colonial governor to openly oppose the Stamp Act, moved late on Tuesday June 13 to shift the manner of doing business to a committee of the whole.  As he, other New Englanders, especially John Adams who likely instigated the maneuver, and Virginians, Patrick Henry, Richard Henry Lee, and George Washington included, viewed the parliamentary change as the necessary yanking up the weeds that were choking off decisive actions.  They did not meet solid opposition.

Starting promptly at nine the next morning, following prayer, sitting as a committee of the whole. Ward read out the first of the resolutions calling for “six companies of expert riflemen, be immediately raised in Pennsylvania, two in Maryland, and two in Virginia.”

Here was the “Declaration of Arms.”

To break the impasse of talk over deed, the resolution went on: “That each company, as soon as compleated, shall march and join the army near Boston, to be there employed as light infantry, under the command of the chief Officer in that army.”

Here was the order.

These few words were momentous.

What the delegates agreed to June 14 was the creation of an American army.  They also approved its deployment. They then signed off on spending $2 million on it. Yet, they remained too divided yet to create a nation for its army. Whether they considered at length  that possibility over earlier proposed “Declaration(s) of Arms” is debatable.  They sent back to the colonial Associations and their local committees’ the requirement, with no power to enforce it.  In Berkeley County, Virginia and across the Mid-Atlantic “Back Country,” the “boys of 1775” were already marching — in drill.

Within two months, they would be in the siege lines around Boston, commanded by the newly-appointed general, Washington.