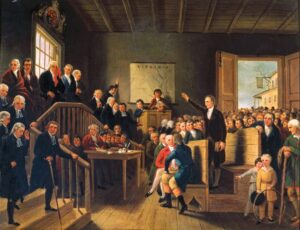 Since we are nation that treasures “a day for everything,” tomorrow, January 16 marks “Religious Freedom Day,” which in being contorted in every which-way by today’s American Savanarolas and Comstocks. Under that banner, they pontificate with holier-than-thou zealous rhetoric from pulpits, at school board meetings, and inside legislative halls. They rub their hands with glee as courts are handed hundreds of “culture war cases” across the land yearly for decisions [without stare decisis a consideration] to re-write history in their own image of what the Christian deity wants, Amen!
I offer the landmark case of Thomas Jefferson’s teacher and his colleague’s demands on how as clergy they MUST be paid as clergy in the Established Church and by all residents — from evangelical Baptists, Methodists, and atheists to the few who actually filled their Anglican pews.
And who would be on the side of dis-establishing the church: Patrick Henry [who took on his father and uncle in the matter], Thomas Jefferson [who claimed it as one of his three greatest accomplishments], and James Madison [who drove the Bill of Rights through the first Congress into the Constitution].
https://allthingsliberty.com/…/the-parsons-cause…/
atheistsBaptistsculture warEstablished ChurchfreedomHenryJefferson ComstocksMadisonMethodistsreligiousSavanarolas