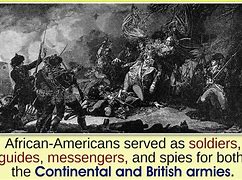 After the Democratic Convention and the Eve of the Republican, it’s time to actually look at the “founding of the Great Republic” and “the land of the free and the home of the brave.”

So courtesy of the late historian Michael McDonnell, who spent a life’s career dissecting the Revolution in a “hotbed” of its instigators — Virginia, we’ll follow him through victory at Yorktown.

“In the end, the only Virginians who participated in the siege of Yorktown with any great enthusiasm were the hundreds of black Virginians who had joined the British.  Though there was little they or anyone else could do at that late hour, Cornwallis believed that ‘great numbers’ of enslaved Virginians ‘have come to us from different parts of the country.'”

“Many black Virginians died defending their freedom while whites stayed at home to protect theirs. …’immense number of Negroes have died, in the most miserable Manner in York,’ mainly from disease.'”

If you wonder why the ‘black Virginians’ ran to the shrinking British lines and risked death, think “freedom.”

As for those enslaved during “Virginia’s crisis moment” in 1781 when Lord Cornwallis entered the Commonwealth, intent on heading to New York, McDonnell notes.

“Directly or indirectly, black activism also caused thousands of white Virginians to move or sell their slaves farther westward, disrupting long-established and complex family and kinship networks. …Because white masters could not trust their black workers to remain on the plantation or avoid capture by the British, they often moved them out of the way of the enemy.”

[My comment here: “trust,” why stay? And I should add many of those “thousands of white Virginians” had avoided service in their local militias and certainly the Continental Army; “rich man’s war, poor man’s fight” would be accurate in the .]

If you believe “selling down the river” refers to the 19th century Virginia [and some other Atlantic coastal states] practice of slave-trading to the “old Southwest,” he adds in the 11 Tidewater counties around York  [I lived in two of them through the Bicentennial of the “Glorious Fourth] there were 12,000 fewer slaves in 1782 than in 1755. “Many, of course, had fled.  Owners forcibly removed most others to counties in the southside and piedmont.”

A few masters kept on trucking across the Appalachians: to Kentucky and Tennessee, claimed by Virginia and North Carolina as semi-incorporated localities [also pushing the remaining Indian tribes there who sided with the British out of the way — forcibly].

Many slaves never had the opportunity to flee; the British army wasn’t close enough, same was true in the Civil War in the case of the Union Army.  Others stayed where they were out of loyalty to THEIR [caps mine] family not the masters’.

So the Revolution, promised Freedom, even to the white Sunshine patriots; but what happened for blacks was “the institution of slavery became wider-spread and more deeply entrenched in most places east of the Blue Ridge mountains.”

Can you guess what happened next?

“Thus it might have been no accident that black rebelliousness continued — and grew more violent — in the post war period as enslaved Virginians grew increasingly frustrated with the lack of movement in emancipation and angry at the prospect of being forced to move westward.”

Now for the greatest leap of all — across the racial line.

And as for the Virginia militia being instrumental at Yorktown in trapping Cornwallis, well, they were mostly MIA.  The poor and “middling class” were tired of the constant call-ups, disrupting their lives and livelihoods, and resentful about the heavy taxes being laid on them.  They were no longer answering the call to arms. “No taxation without representation” lost its resonance as a slogan when they could no longer feed their families, had crops and livestock sequestered for army use, and paid in continentals or even more worthless Virginia currency.

The wealthier, as is often the case, “had other things to do,” including moving out of harm’s way, and had been doing that for years because “they could.”