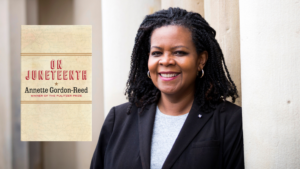 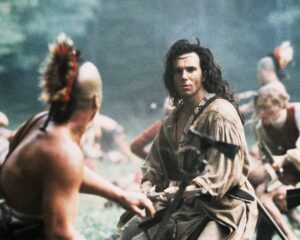 Annette Gordon-Reed and her latest book; Daniel Day Lews in 1992 epic “Last of the Mohicans.”

“All the major currents of American History flow through Texas.”

[For an extended discussion, https://lithub.com/on-juneteenth-and-the-struggle-to-commemorate-and-make-sense-of-protest-and-rebellion/?utm_source=Sailthru&utm_medi]

As Gordon-Reed has written,  those currents were flowing long before the Austin family started hawking land in Texas, as colonizers for the Republic of Mexico.

Her 2009 Pulitzer Prize-winning “The Hemingses of Monticello, An American Family” [really think of seeing the “Sage of Monticello,” or “Mr. Jefferson,” as he is still reverently called, through a different lens] and her conversations on public history/ academic writing/ American history/ and race at two biographers’ conferences I attended were more kindling to the fire on wanting to learn more about how we got to where we were.

The question of “how we got where we are” wasn’t new to me then.  It was one that I kept annoyingly asking in high school history classes – starting with in teen-aged terms: how could the “Puritans” and “Pilgrims” of Massachusetts ever find common ground with those “Cavaliers” and “Slaveholders” of Virginia?

That passion for an answer to a really unanswerable question was stoked by two remarkable history professors at the University of Illinois — Raymond Phineas Stearns and Robert McColley.

To a “child of the Sixties” and, in the words of the training instructors at Lackland, AFB, Texas [aka drill sergeants] a “Tet War Baby,” the question took on personal urgency.

In addition to their own writings on colonial, the Revolution, and the early Republic, which I later read but were not required in classes they taught [bless them for it], both used works by Perry Miller on the Puritans and his student Edmund Sears Morgan, whose reach went into depth on slavery and Virginia.

While Miller died young, Morgan lived into the Twenty-First century and was a regular contributor of historical essays — actually extended reviews of newly-published histories in the New York Review of Books.  Many of them are collected in his “The Genuine Article, A Historian Looks at Early America,” (New York: W.W. Norton, 2004).

The book’s “Part Two — the Southerners” covering sixty pages are must reading again in light of the police killing of George Floyd in Minneapolis a little more than a year ago. The “two societies” and “separate but unequal” should have resonated to millions that late spring day.

If you didn’t hear those phrases [again, for people of a certain age] in May 2020, you must have stuck your fingers in your ears and then hummed.

So here it is again, “Our nation is moving toward two societies, one white, one black – separate but unequal.”  The quote is drawn from the Kerner Commission report that was released in March 1968, the month before Martin Luther King was murdered in Memphis.

“A lot of things happened” after the Memphis murder was the way some people then and now summed up the “American Experience.”

With a foot stomp, the essays in that part, as dated as some  naturally are,  should remain  thought-provokers after President Donald Trump’s highly partisan [and blinders on to race] 1776 Commission report., a much different take on the “State of the Union” than Kerner’s eleven-member panel.

Wonder what the “Outrage Machine” would have to say about the commission’s highly critical race theory?

The arguments Morgan poses in reviewing a broad swath of “contemporary” [at the time] literature — like the Moynihan Report on African-American families still add perspective as to where we are now.

At the same time as re-introducing myself to Morgan’s later writings, I had started work on a project involving Thomas Jefferson’s father and a group of “Albemarle Adventures,” the Loyal [Land, added later] Company.

Into this circle of “grab, grab, grab” land Virginians – remember, to them, the Indians don’t count, there loomed a presence in the dark woodlands along the Mohawk [overwriting reminiscent of James Fenimore Cooper], named William Johnson.  He kept appearing as a force of nature and imperial power. To say, he played a consequential role in the ultimate British victory in the French and Indian War – while despising Sir Jeffery Amherst, governor and commander in Canada, and William Shirley, Massachusetts’ longest serving provincial governor – would be an understatement.

I didn’t expect to see a connection between scratching another itch of curiosity to find out more on this long-dead Irish immigrant on the colonial northern frontier and race — white, native American, and free and enslaved blacks in colonial New York.

Silly me, it was there – all the time.

No it wasn’t Cooper’s “Last of the Mohawks” treatment of the “colorfoul commander of the Indians,” a real life man. Yep, Johnson’s there by name and a ghostly figure in a number of the “Leatherstocking Tales.” Sadly, as I remember, he does not appear in any form during Daniel Day Lewis’ 1992 epic role  as Hawkeye in the film version of the “Last of the Mohicans,” a movie I loved far more than the forced [book report due] reading in school days.

He was an Irishman and a Catholic by birth; a Church of England member [possibly], when required in North America, but a practitioner of neither.  He admittedly loved some of the churches’ rituals. It was the intimate relations that he built with the Iroquois Confederacy that was key to the French expulsion from much of North America.

Fintan O’Toole’s biography, “White Savage, William Johnson and the Invention of America.” (New York: Farrar, Straus and Giroux, 2005) goes a long way in shedding light on this “Outlandish Man.” This larger than life figure’s influence spread far westward from his Mohawk River palace and fort to the Illinois country and what is now the Upper Peninsula of Michigan.

O’Toole, whose commentaries on contemporary American politics — often in the New York Review of Books like Morgan’s essays before him, is a deft analyst of Eighteenth Century British, Irish, and North American colonial politics and culture.

The author draws the ties closely between Johnson’s family history in Ireland and his life as a fur trader extraordinaire in New York. His definition of “marriage” for himself was elastic having several “wives” – European and Indian at the same time. He welcomed his white and Indian children into an extended family.

Stripped to the bone, however, as O’Toole writes, Johnson “was in America not to protect the Iroquois, but to restore and advance his family name and personal status.” To my mind, not far different than his Virginia contemporaries in Albemarle.

Colonial New York allowed slavery; the state of New York didn’t abolish it until 1827, in place while Cooper was writing but a subject he generally in his fiction.

While O’Toole doesn’t answer the question as to whether Johnson had sexual relations with any of his slaves, he does note the “master’s” posting of rewards for runaways, casual accountings of sales, and failures to name the slaves he held. Johnson also laid covenants on lands he granted to remnants of Northern tribes like the Mohegans and Pequods, so there would be no transfer to descendants who “have intermixed with Negroes or mulattoes.”

That relentless pursuit of advancing family O’Toole translates as “casual cruelty to his African neighbours was part of his Irish pride.”

To say the least.  No romantic adventure among the Iroquois.