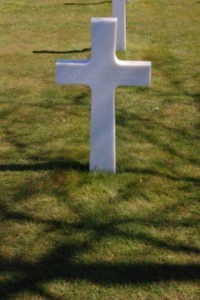 Nigel Hamilton’s recently-released biography of Franklin Delano Roosevelt, “War and Peace, FDR’s Final Odyssey D-Day to Yalta 1943-1945” rightly portrays the president, not Winston Churchill, as the political leader with the patience to have the commanders, the soldiers, the sailors, airmen, Coast Guardsmen, the warships — from battleships to cruisers [light and heavy] to destroyers to landing craft, weapons in place in spring 1944.

Most importantly, FDR had the unwavering will to open the “second front”  in France to defeat Nazi Germany, not to waste lives in sideshow distractions in the Mediterranean, Balkans, and Greek isles, to avoid the showdown that Churchill repeatedly tried to delay.  The prime minister, fearing a slaughter on the beaches and the raining down in a new storm of terror on Great Britain “Hitler’s dreaded revenge weapons” — V-1s, cruise missiles; V-2s ballistic missiles, dragged his heels, threw tantrums, and tried end-runs through volumes of rhetoric.

To walk in the American cemetery at Normandy is a sobering experience.  Behind the chapel, closest to Omaha Beach, are the graves of the soldiers from the 1st and 29th Infantry Divisions, who were killed in the first waves of the invasion. Trying to get them ashore were a coxswain and two or three other sailors, manning the Higgins’ boats machine guns.  A number of them are also buried nearby, as are beachmasters who were directing the craft to landing zones and trying to keep moving everything and everyone further and further inland, off the sand.

The cross on the grave of an Unknown is from that section of the cemetery.

The dying Roosevelt, speaking on the radio, prayed that June night “in this hour of great sacrifice.”

In the short address, he said,  “Some will never return.  Embrace these, Father, and receive them, Thy heroic servants into Thy Kingdom.”