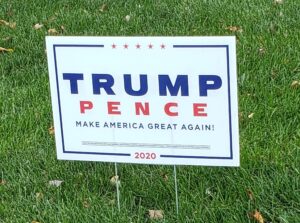 Yes, it has happened.

As reported earlier, the first Trump sign was planted on the highest promontory in this duchy of the “Land of the White Democrats.” Over the weekend, in the dead of night, however, it was stolen. The loyal supporter told Lillian, on her intrepid tour of the neighborhood of the crime.

Tranquility has left this “promised land.”

As the days wind down [always a good phrase to throw in somewhere] to the polls “opening” in Plague Year 1, Common Era, the neighborhood not only has fallen victim to “sign stealing,” learned from the Houston Astros.

There is also now rampant “sign spiting.” Cross-cul-de-sac neighbors are putting up Trump-Pence to spite Biden-Harris [though the “socialists” hold a substantial lead in lawn decorations for candidates].

As 45 noted earlier this month in Johnstown, Pennsylvania, made famous for a 20th century calamity, “Suburban women, will you please like me?  Please, please, I saved your damned neighborhood, okay?  The other thing, I have much time to be that nice.  You know, I can do it but I got to go quickly.”

This is a matter for this duchy’s Homeowner’s Association to decide quickly. “Suburban women” are demanding it!

Or a surer way is to send the question on an expedited course to Bill Barr’s Justice for 45 Department and the federal courts to handle.

The reasoning is clear for federal intervention since October began when a department attorney said it was now hokey-dokey to seek out election fraud before  the “official” day to vote.

Yep, the JD [not juvenile delinquents] on Pennsylvania Avenue, kitty- or catty-corner from the Executive Mansion’s watering hole and caravanserai, has reversed its policy of NOT “interjecting the investigation itself as an issue” in an election.

Now, let’s not limit this new reach [stretch] to disgruntled postal workers in Pennsylvania finding all the Trump absentee, aka “mail-in,” ballots trashed. Or some guy in Dallas County, Texas busily at work making his dozens of ballots count.

Think a lowly JD appointee, hunkered in his/her studio apartment with five roommates fearing the end of the ride coming in the “cold and flu season,” since the pandemic will be gone by then.

Apply the “logic” of intervention to sign-stealing and maybe even extend it a teensie-bit to SPITE signs.

Best of all, this fits very comfortably in the thinking of a Justice Department that believes it is the president’s PERSONAL attorney since Michael Cohen turned coat. PTL he was jailed and Roger stone freed by the grace of the Lord of the Manor. [See Carroll defamation suit over rape allegation pre-election].

JD has two potential courses to follow, so it can use one in say a district court in the District of Columbia — a reach across the Potomac, but this is a federal election after all and its appeals court and the “highest court in the land” are nearby.

The second choice is the “you charge ’em; we jail ’em” Eastern District of Virginia, sitting in Alexandria.

And best of all, there is a third choice  for “General,” official honorific for his position, Barr. He could resort to his purely “advisory role” in the “Dominate the Streets — Dominate the Battlespace” crushing June victory over Antifa in the battle for St. John’s since no one “ordered” the Park Police to engage before the official curfew — as all know from “Hill probes.”

The way seems clear to rid “suburban” heavens of anarchists, identified by their “tear  down the republic” signs for a “monster” in waiting. Time to free, the homeowner who has hung the proud red “Trump-Pence” banner in the back of his garage and not readily visible from the street of the vandals and visigoths that prowl the closes and keeps in this part of the Fairfax proprietorship.

We shall continue to report the “sign wars,” but we are disqualifying all properties with multiple signs supporting a particular candidate — void sign.  We also are not tallying those who hide their banners from easy street view.

As you can see, we inspect on foot and behind the wheel.