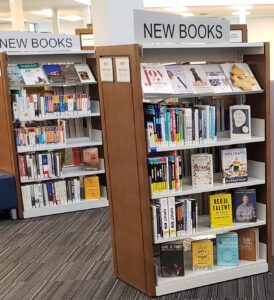 So in Plague Year 1, Common Era, on my quarterly duty of filling the trusty Honda’s tank, coupled with a rare visit to spending money at the Post Office, and a later trek through the “wilds” of Fairfax, I actually went “inside” a library.
This was a first in six months; and it was not just any library. It was the Pohick Regional, featured on the front metro page or the front real estate page of the Washington Post when it opened in 1988.
So quoting from architecture critic Benjamin Forgey’s piece:
“The Pohick Regional Library rises like a bright, curious civic surprise from a hollow near Old Keene Mill Road — pretty much what the Fairfax County government wanted in fast-growing Springfield. It’s a flawed building but appealing, ingenious — a piece of ’50s functionalism dressed up with color, decoration and a bit of romance in the form of yellow-topped, hexagonal brick towers.
“There’s a feeling out here that the county government is far away,” says Eason Cross Jr., its architect, “so the main goal was to establish a visible symbol.”
And it certainly was a “visible symbol” rising up out of the hollow that had once been a truck farm.
Inside I picked up the book I had put on hold — had accidentally sent it to Pohick, my former neighborhood library, but still close.
Looked around the since remodeled building, saw masked staff; two canvas bins on wheels at the entrance for returns, a few parents with pre-schoolers and kindergartners, and two early teens — all masked.
No other bodies in view.
Again quoting for the Post:
“This was easier said than done, because other requirements — for books, stacks, meeting rooms, offices, study areas, electronic equipment and the like — dictated a no-nonsense single-story box unfortunately situated on a low, four-acre site that angles onto a winding, four-lane rush-hour road.
[After the most recent re-modeling, closed for a year, I personally wanted the closed carels — part of the “study area” referred to in the account — to remain, but alas and alack, in pre-pandemic days, did that idea in for cubicle open spacing — just like offices. We’ll have to see what a brilliant decision that move was.]
So I was free to roam around, choose what I want, etc., etc., Noted with chagrin, the “new mysteries” were limited and “hot picks” were gutted, but the 900 series was doing just fine.
Guess which one in the “new books” Americana section, I chose to accompany “The Tower of Skulls,” Richard Frank’s first volume on World War II in the Pacific.
Americana.carelsinsidelibrarymysteriesnew bookspandemicPohick new booksquarterlyWashington Post
Share This
RECENT POST
CONTACT
703-250-4869
john@johngradynowandthen.com
If your organization is interested in having John speak at your event, please call: 703-250-4869 or email john@johngradynowandthen.com
CONTACT JOHN
© Copyright 2018 | John Grady | All Rights Reserved | Site by d2dcreative.com
Back To Top
×