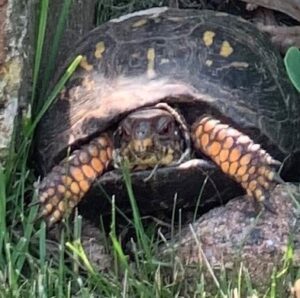 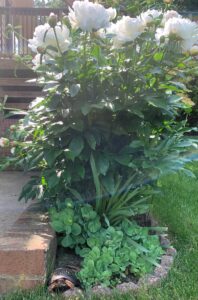 Each of the three grandchildren in their explorations of the estate in the Far Reaches of Fairfax have discovered a turtle in the cool of the shrubbery by the manse’s front step.  The youngest, turning 8 in a matter of days, named his discovery Kai [think Teen-Age Mutant Ninja Turtles].  Speculation has risen whether the turtle spotted more than a decade ago was the same one the younger ones spotted later. Adding to that unsettled state of affairs Lillian’s noticing this “Kai,” at the edge of the peonies — which burst with a white blossom for a week to 10 days — by the downstairs office. If it is the same one, Kai is an ancient sage, full of wisdom … and still sprightly to cover so much ground since last sighted two or so years ago.