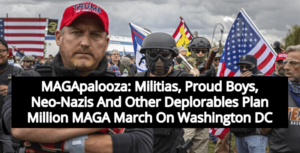 For “Certification” and stage -setting for the Magapalooza

On my reading agenda in the coming months of Plague Year 1, Common Era is “How the South Won the Civil War.” Heather Cox Richardson’s book fits in with work I am doing on a Confederate figure and the immediate aftermath of the war.

No, Richardson’s history is not the opening salvo of the “1776 Committee,” authorized by presidential proclamation to whitewash the American past in their two-year terms. 45’s intent was to be up revving all “patriots” — by his definition alone, as to who could wear that mantle  —  to 2026, the 250th anniversary of the Declaration of Independence, and midway in either his third or latest term.

As the world knows he wants all HIS “patriots” to be “wild” in Washington in the coming days, so third is possible.  I can barely wait for the “Million Militia March” sometime between January 17 and January 20 in the capital.

So granted titles — especially books’ — can be deceiving, but Civil War Talk Radio’s interview with her should clear up any misunderstandings on that point.

[‎Civil War Talk Radio on Apple Podcasts] [Needs to be added. The latest White House release termed the group a “committee;” it has also called it a commission, so I will mix the two accordingly, following the four years of hallowed tradition of “alternative facts.]

With all that trouble in mind, I have read or re-read, W.E.B. Dubois, Eric Foner, John Hope Franklin, Caroline Janney, et al., for secondary sources and context on what I was reading from firsthand sources on the immediate end of the Civil War — especially in the Lower Shenandoah Valley.  One author I let slip through my note-taking, however, was David Blight, who received the Pulitzer Prize in 2019 for his biography of Frederick Douglass.

But what has stayed with me through the fall into the winter is Blight’s “Race and Reunion: The Civil War in American Memory,” published twenty years ago this year. It rang with immediacy in the aftermath of George Floyd’s killing by police in Minneapolis and 45’s beating white  racial  fears drum incessantly since descending the gilded staircase five years ago.

As days passed in the Plague Year that I date to March 24 — lockdown in Virginia, I hoped it would be an antidote [vaccine?] to 45’s Christmas “gift” to the nation. Before departing for South Florida, he  named  his 1776 Commission to sweep away the “twisted web of lies” that now make every public school child “hate their own country.”

As he said that, I kept flashing back to the lodestar of “right history,” the Southern Historical Society’s setting the record straight and Blight’s and the others’ dissection of just how “correct| those views were and are.

“The face of the South in Dr. Richardson’s book is a bitterly racist and sexually abusive South Carolina planter and senator, James Henry Hammond, who called Jefferson’s notion that all men are created equal “ridiculously absurd.”

“What is unusual is to bring a historian’s confident context to the day’s mundane politics. She invoked Senator Hammond when Representative Kevin McCarthy and other Republican leaders signed on to a Texas lawsuit seeking to reverse the presidential election, comparing the Republican action to moments in American history when legislators explicitly questioned the very idea of democracy.

“Ordinary men should, Hammond explained, have no say over policies, because they would demand a greater share of the wealth they produced,” she wrote.

On January 2, she took a two-paragraph dive into the chaos of the 1876 election to look at 2021’s “heroes of the republic” [my term not hers] like Senators Cruz, Cotton, Hawley — all with “naked ambition” and “shaky ethics” for the White House [quotes again mine, not hers].

[Link to Richardson’s postings, Letters from an American (substack.com)]

So now,  from Blight’s classic.

First quoting Douglass on the “Color Question” in 1875 as the nation was a decade removed from Appomattox, tired of Reconstruction in the Democratic Party’s counter-revolution, and planning to celebrate “unity” and “reunion” at its Independence centennial because the Confederacy was “redeemed.”

Well by 1893, Douglass had the now standard answer that 45 has forged in steel or titanium, if available.

Getting the record “straight,” an obvious guide to the 1776 commission, Colonel Richard Henry Lee, a Confederate veteran, in a speech in Virginia said, “We were not rebels; we did not fight to perpetuate human slavery; but for our rights and privileges under a government established by our fathers and in defense of our homes.” By 1906, Joshua Chamberlain, a Union hero at Gettysburg, was being lectured by a Confederate veteran, that he the Southerner deplored “the institution of slavery (as an economic but not as an ethical crime) and give to Northerners the same rights of moral and ethical conscience … to be neither blinded by prejudice not led astray by the injection of moral issues never involved.”

Ah yes, certainty over what had transpired [ignoring most of the Confederate states’ ordinances of secession language] Those “moral issues” complicate matters.

Looking at the novels that accompanied this certainty and boldly underlined these premises, particularly, “defense of homes,”  the Confederate veteran in fiction became the popular hero, who gave the nation “an eternal refrain of remembered agony.”

[Anyone ever see “Gone With The Wind?” Bet someone at 1600 Pennsylvania Avenue NW has, and called it a documentary.]

Again from Blight, “Our literature has become not only Southern in type, but distinctly Confederate in sympathy,” was how Albion Tougee,  a Union veteran and a prolific writer in the Gilded Age, summed up the change. As for African Americans in this post-war world, Tougee wrote, “The Negro has of late developed a capacity as a stock character of fiction, which no one ever dreamed that he possessed in the good old days when he was a merchantable commodity.” (219-20)

To put the full stamp of approval on how pre-Emancipation days “really were,”  Mildred Lewis Rutherford of Athens, Georgia, the historian general of the United Daughters of the Confederacy from 1911-16, proclaimed in her lectures in ante-bellum finery, “The Negroes under the institution of slavery were well-fed, well-clothed, and well-house.  How hard it was for us to make the North understand this.” (280-81)

That was the answer to Douglass’ question as to what peace brought to whites — in his time and now.

I doubt the “Proud Boys” and others who are rallying with their own “terrible swift swords” in Washington this week will be singing out with Julia Ward Howe’s 1861 “Battle Hymn of the Republic”  lyric:

“As He died to make men free”