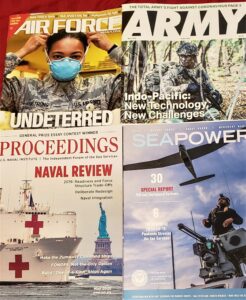 A special salute to the editors and staffs of these four military association not-for-profits. You are the winners in my informal [now suspended because of the pandemic] contest to inform the work-out public

After reading the NYT Science section’s story today on the re-opening of gyms, it likely will be months — or longer before I return to mine. But I wanted to share very informal surveying — observations — about peoples’ reading tastes in MY gym, not anyone else’s.

To be blunt, I prefer print publications over online — though I subscribe and consume both. Without going into a long list of other print periodicals that arrive in our house and used to be taken to the gym for others to read on a bike, treadmill –though I don’t understand that, or when through, are now consigned to recycling.

Put it this way, the number of these print publications is closer to two dozen than it is to twenty; and I may have forgotten one, two, or three.

Now to share a publishing industry secret with the public — the “Deep State” tensions of the business — at least as it used.

Having worked in newspaper and periodical publishing for years, I can repeat from memory circulation and advertising pitches for livelier copy needed from the editorial side to spark “single copies,” “rack sales” and “pass-alongs,” as if that made a significant difference to “real” subscriptions. [Now add shilling “the product,” “the brand” on cable news, social media, ad nauseam].

Their argument — from both departments — always ended on: “We drag in the money and you just p… it away.”

So although retired, I “passed-along,” if any circulation or advertising VP or director is still COUNTING or even WORKING, almost all the magazines that came into the house.

First, the demographics of the market being surveyed.

I live — in the Post’s description, “the land of the White Democrats.” This land is filled with neighborhoods with an out-of-proportion to the rest of the Washington metropolitan area population of active-duty, retired military, DoD civilians, and contractors. [Easily checkable by the “impact aid funds” that flow into the school systems for teaching their children and the head counts elementary, middle and secondary schools post on their websites saying whose attending — real estate agents love those data points.]

These are four of the six most popular of my “pass-along” magazines; and the gym’s location in that group of neighborhoods is definitely a factor. To be transparent, the other two are the listicle “Washingtonian” and glossy over-priced things I would never wear much less buy “Vanity Fair.”

I judge “pass-along” in two ways — wear- and-tear on the publication after it has been added to the reading bins, racks, or tables, and “take-homes.” [This gym usually cleans out older material monthly — except newspapers, which go daily.] “Vanity Fair” tops the light-fingered “take-homes.”

Since I “hit” the gym at least four times a week, these were steady observations — particularly of the “take-homes.”

Wonder if the light-fingered returned them or brought in replacements, but different magazines?