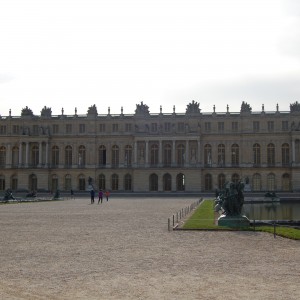 As a high school student and again in college, I eagerly read Francis Parkman’s various histories of North America as assignments and for pleasure. I re-read several of them recently, notably LaSalle and the Discovery of the Great West, published in 1869.

While battling a neurological disorder that often left him blind, Parkman traveled to many of the locations he wrote about and went often to Europe to research original sources. Sometimes Parkman had others read the records to him and sometimes he had to dictate his writings that led to dozens of articles and books. He was an explorer himself and hailed as such Theodore by Roosevelt.

Much older I see his 19th century prejudices shining through [race and religion], but am still in awe of his setting a scene. Having visited Versailles this spring, I was particularly struck by this paragraph after Parkman recounts LaSalle’s extended ceremony complete with hymns, blessings, volleys, and exhortations in claiming a huge swath of what is the United States today for the “Sultan of Versailles,” Louis XIV, “the Sun King.”

“On that day, the realm of France received on parchment a stupendous accession. The fertile plains of Texas; the vast basin of the Mississippi, from its northern springs to the sultry borders of the Gulf; the woody ridges of the Alleghanies to the bare peaks of the Rocky Mountains – a region of savannahs and forest, sun-cracked deserts, and grassy prairies, watched by a thousand river, ranged by a thousand warlike tribes, passed beneath the scepter of the Sultan of Versailles; and all by virtue of a feeble human voice, inaudible at half a   mile.”