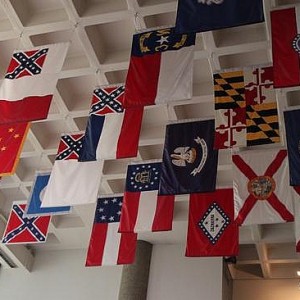 Near the entrance of the Museum of the Confederacy in Richmond, Va.

The end of May and early June are shaping up to be a very busy time.  At noon May 27 at the Navy Museum in the Washington Navy Yard, I will be speaking on Maury’s critical role in frustrating the Union Navy’s attempts to take Richmond from the James River. Yep, so next stop will be in Richmond where I will be speaking at noon June 5 at the Museum of the Confederacy on Maury’s part in defending Virginia before its forces were merged into those of the Confederacy.  And oh yeah, there will be more than a mention of his successful mining of the water approaches to the capital and his aborted attempt to build 100 gunboats to protect Southern and Gulf Coast ports. Last but not least, I will be in Newport News the following day, at one of my favorite places – the Mariner’s Museum.  I will be speaking 11 .a.m. (tentatively) June 6 at the museum’s Ocean Day celebration. No talk about mines, gunboats, commerce raiders, etc., in this one. It will center on why Maury became famous as “The Father of Oceanography” and the “Pathfinder of the Seas,” a driving force in American naval exploration and the author of one of the most popular books in the 19th century, “The Physical Geography of the Sea.”

Mariner's MuseumMauryMuseum of the ConfederacyNavy MuseumNewport NewsRichmondspeakingWashington Navy Yard
Share This
RECENT POST
CONTACT
703-250-4869
john@johngradynowandthen.com
If your organization is interested in having John speak at your event, please call: 703-250-4869 or email john@johngradynowandthen.com
CONTACT JOHN
© Copyright 2018 | John Grady | All Rights Reserved | Site by d2dcreative.com
Back To Top
×