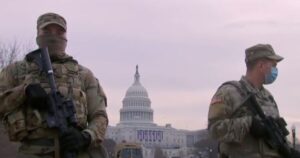 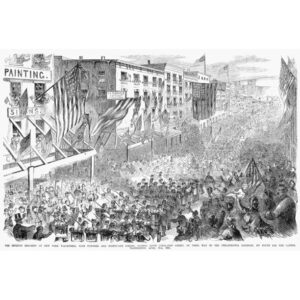 “We are living in eventful times. Our National Capital is echoing with the tramp of armed men, and the glorious sun light flashes back from thousands of glittering bayonets. “Grim-visaged war” is upon us; and yesterday, on yon grassy field, a thousand ready right hands were raised to Heaven; a thousand willing voices rung out on the still air, pledged to sustain the Constitution of our common country. This means war, if our enemies persist.”

Sermon from the Speaker of the House of Representatives dais, April 28, 1861

Although the Episcopal cleric began his sermon, “Fellow Christians and Fellow Soldiers,” his words are as apt today as we moved through “President’s Day,” our lamest holiday, and the conclusion of Donald Trump’s second “successful” for him impeachment trial.

This impeachment trial centered on his “incitement of insurrection” on January, 6, 2021 in the mob assault on the Capitol itself, not the artillery barrages from the Charleston battery and surrounding harbor islands on the unfinished Fort Sumter, April 12, 1861.

These “Silk Stockinged” militiamen had been rushed from Manhattan to ensure the capital and the Capitol was not taken over by secessionists — still remaining in the District of Columbia National Guard, the Maryland militia, or traitors resisting newly inaugurated President Abraham Lincoln’s call on the governors for volunteers to put down the rebellion in South Carolina.

As the New Yorkers were parading to their departure point for their ninety-days of duty, blood-thirsty mobs in Baltimore were battling Massachusetts militiamen on the city’s streets in an effort to keep them from reaching Washington to defend the “Black Republican” government from attack.

When the chips were down following the 2021 mob assault on the Capitol, several angry Republican office holders, like Texas Governor Greg Abbott, questioned the FBI’s vetting the “loyalty” to their commissioning or enlistment oath of Guardsmen assigned to Washington to ensure that Joseph R. Biden was safely inaugurated as president of the United States January 20.

As the Dallas Morning News reported days before the inauguration:

“This is the most offensive thing I’ve ever heard,” Abbott said in his Monday night post. “No one should ever question the loyalty or professionalism of the Texas National Guard. I authorized more than 1,000 to go to DC. I’ll never do it again if they are disrespected like this.”

So drawing on the two most serious disunion crises in the republic’s history, possibly  a few Republican office holders can see why the militia is “vetted” and why they are “still” in Washington.

No Blue Ribbon Commission is going to paper over this

And now better yet, from Republican House members, a number who  still insist on having  thousands of Guardsmen on the border with Mexico, demanded an explanation from the Army as to why thousands of citizen-soldiers and citizen-airmen were still in the capital a week after the inauguration.

Hasn’t this matter been settled to everyone’s satisfaction seemed to be their reasoning.

As the Hill reported:

“As you know better than anyone, our National Guard men and women are deployed on short notice and pulled away from their families and jobs,” they wrote. “The National Guard should be used as an option of last resort.”

I guess they and Senator Tom Cotton, R-Ark., would have been passed over by the Oath-Keeping, Three Percenters, et al.,  avenging angels.

Did they actually believe that during the second impeachment trial there was not the strong possibility of another mob riot at the Capitol?

Send the boys and girls home in the National Guard is their underlying message.

Or the most ironic of Republican reactions to the riot came from Michigan State Senate Majority Leader Mike Shirkey. He told the Reclaim Our Republic group to protect his position a few days ago about “events” of January 6. “That wasn’t Trump people.  That’s been a hoax from day one.”  The proof was in the pudding — not enough security from the start.  “It was all staged” and Senator Mitch McConnell was part of it.

Shirkey had a lotta digging to do after he wanted to ban gun-toting in  his Capitol and refused to change the outcome of the presidential vote in the Wolverine state even after meeting with Trump in the White House.

The news account make no mention of Michigan “militiamen” plotting to kidnap the governor.

And never forget, THE ELECTION WAS STOLEN!

In the aftermath of the 1860 presidential election, the voters  in the Deep Southern states and many in the Border Slave States couldn’t believe Lincoln actually won. South Carolina was out the door before the New Year broke with Mississippi, Alabama, and Florida, only a United State since 1845, in hot pursuit before the ides of January.

As derelict about his presidential duties and obligations as James Buchanan was in office, he at least had enough sense to demand his Army chief Winfield Scott report to Washington to size up the capital’s defenses.

Scott talked the dangers over with Charles P. Stone, whom he knew from the Mexican War.  Stone said he thought two-thirds of the militiamen in the district would be loyal if push came to shove.  Taking no chances, the old general tapped Stone as his inspector general.

Not waiting around for rebellion, Stone went on January 2 to sound out one company commander; and what he learned is why you “vet” the military for loyalty in times as crisis, as Scott had done himself in Charleston thirty years earlier with the Nullifiers.

When Scott first arrived in Charleston in the 1830s as the crisis was reaching a flashpoint, he demanded all commissioned officers repeat their oath. If he had any doubts over an officer’s loyalty, the general immediately shipped the man northward.  At the same time, he demanded the federal fortifications in the city be completed and strengthened.

In the 1880s, Stone wrote in Century Magazine, later incorporated in Battles and Leaders of the Civil War, “Washington on the Eve of the War,” vol. 1:

This should be required reading on why you “vet” the military.

On the 2d of January, I met, at the entrance of the Metropolitan Hotel, Captain Schaeffer, of the National Rifles of Washington, and I spoke to him about his company, which was remarkable for drill. Schaeffer had been a lieutenant in the Third United States Artillery, and was an excellent drill-master.

He had evidently not yet heard of my appointment as Inspector-General, and he replied to my complimentary remarks on his company:

“Yes, it is a good company, and I suppose I shall soon have to lead it to the banks of the Susquehanna!”

“Why! To guard the frontier of Maryland and help to keep the Yankees from coming down to coerce the South!”

I said to him quietly that I thought it very imprudent in him, an employee of the Department of the Interior and captain of a company of District of Columbia volunteers, to use such expressions. He replied that most of his men were Marylanders, and would have to defend Maryland. I told him that he would soon learn that he had been imprudent, and advised him. to think more seriously of his position, but did not inform him of my appointment, which he would be certain to learn the following morning from the newspapers.

It must be admitted that this was not a very cheerful beginning. [12] On inspecting the “National Rifles,” I found that Schaeffer had more than 100 men on his rolls, and was almost daily adding to the number, and that he had a full supply of rifles with 200 rounds of ball cartridges, two mountain howitzers with harness and carriages, a supply of sabers and of revolvers and ammunition, all drawn from the United States arsenal. I went to the Chief of Ordnance, to learn how it was that this company of riflemen happened to be so unusually armed; and I found at the Ordnance Office that an order had been given by the late Secretary of War (John B. Floyd) directing the Chief of Ordnance to cause to be issued to Captain Schaeffer “all the ordnance and ordnance stores that he might require for his company!” I ascertained also that Floyd had nominated Captain Schaeffer to the President for the commission of major in the District of Columbia militia, and that the commission had already been sent to the President for his signature.

[Robert Underwood Johnson, Clarence Clough Buell, Battles and Leaders of the Civil War: The Opening Battles. Volume 1., Signs of War., Washington on the Eve of the War. (tufts.edu)]

Governor Abbott and Senator Cotton and Representative Waltz, both Army veterans, that’s why you “vet” loyalty beyond the oath. And Stone didn’t write that Floyd, a Virginian and namesake son of its governor during the Nullification Crisis, was at best an aider and abettor of secession if not a traitor while in the Secretary of War’s office.

That’s why the Guardsmen are staying in Washington this year.

The crisis isn’t over.