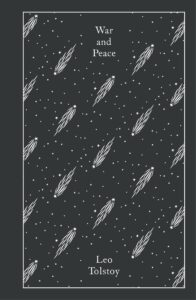 About 2 1/2 years ago, recuperating from detached retina surgeries three and four, I launched into the Briggs’ translation of Tolstoy’s “War and Peace.”

A millennia ago, as part of a class assignment in a Russian history class, I read Tolstoy’s account of the Battle of Borodino as an introduction to what was going wrong with the French [with its allies’] army in its relentless push east that sowed the seeds of its own destruction.

Two observations that Tolstoy made from near the end of the book that really struck me.

So when the “promised land” turn out to be illusion — what’s next?

“When a man finds himself moving forward, he never fails to think of a goal to aim at. If he is to walk a thousand miles a man must believe there is something good waiting at the end of the thousand miles. You need the vision of a promised land to keep on moving. Moscow had been the promised land for the French on their way into Russia; on their way out it was home. But home was too far away.” (1143)

And — wonder if this is part of a lesson plan in war colleges.

“The so-called ‘guerrilla ‘ war had begun the moment the enemy marched into Smolensk. Before it was officially recognized as such by our government many thousands of enemy soldiers — stragglers caught looting or foraging — had been eliminated by Cossacks and peasants, who killed these men off instinctively, like dogs rounding on a mad stray. …The guerrilla destroyed the Great Army bit by bit. They swept up the fallen leaves that were dropping off the withered tree, and sometimes they shook the tree itself.” (1151)