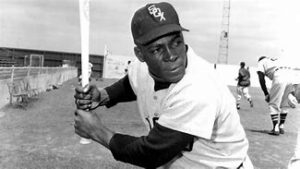 Tyler Kepner’s Case for His Placement in Cooperstown.
I didn’t need today’s New York Times story on Minoso to believe he deserves to be in the Baseball Hall of Fame — with former teammates, second baseman Nellie Fox and shortstop Luis Aparicio [defensive strength up the middle and could get on base].
Having grown up on the far southside of Chicago, I was baptized a White Sox fan. Although we had a television at the time that Orestes “Minnie” Minoso was traded from Cleveland to the White Sox before the 1951 season, I don’t remember WGN [owned by the Chicago Tribune, which boasted of itself — World’s Greatest Newspaper, hence WGN] broadcasting their games.
So it was the radio, probably WCFL [Chicago Federation of Labor] with the “Ol’ Commander” Bob Elson at the mic calling the game at a time when most of the starts were in daylight.
And Minoso wasn’t a one-year flash in the pan. He was the real deal as a player, mentor to Cuban athletes who made it to the major– the numbers are impressive, and very much an “ambassador for the game,” a title often applied to Ernie Banks, “Mr. Cub,” who played crosstown from 1953 to 1971.
As relaxed as Elson was calling play-by-play, “Minnie” was energy — could hit, hit with power, and speed on the basepaths.
And I loved his name.
I had no idea he was Afro-Cuban and equally blank that he was the first black player on the Sox.
My dad had taken me to at least one game before that season, Minoso’s rookie year was with the Sox. In that year, I was still too young to even try out for the Brainerd-Beverly Little League Minors, but I knew Minnie had smashed his way through the Pacific Coast League, the highest minor league to reach the Big Leagues.
Minoso came through as my first baseball iconic hero when he was named “rookie of the year” as the left fielder for the aborning “Go-Go Sox.” [Heroes could arise in individual games, but iconic heroes — didn’t know the word “iconic” then — had to stand the test of time, say over 154 games.]
To be honest, I had no idea he had already played several years in the Negro Leagues; I almost certainly didn’t know those leagues had existed and were still there in 1951.
For decades — on two hands now, I have been convinced Orestes “Minnie” Minoso belongs in baseball’s Hall of Fame.

Minnie Miñoso Gets Another Shot at the Hall of Fame – The New York Times (nytimes.com)