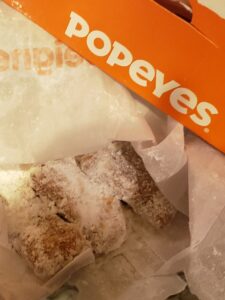 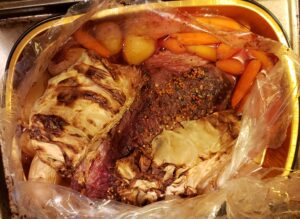 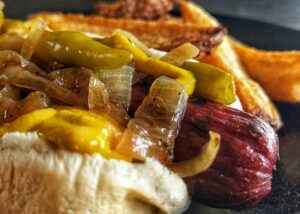 On a rainy, still wintry day, what better way to pass the time between the two feast days that allow the lifting of fast and abstinence to get a second “stick.”

And so, in a Safeway in the far reaches of Fairfax, on our every ten days or so grocery trip, Lillian received her second COVID-19 Pfizer shot.

As promised, no “arm” posting; only bandage on left arm.  April 1 becomes “Alleluia Day,” on this cul-de-sac.

[I crossed that threshold a couple of weeks earlier]

But questions, of course, remain with Irish surnames aplenty, how did we mark March 17 and did we plan to honor St. Joseph with a feast of our own?

For us the breaking of the Lenten fast celebration actually begin the day before with a stop at Popeyes.  As hard as it is to believe, someone — not me — had never had the late Al Copeland’s fast food chicken and biscuits.

Gone are the two Copelands’ that graced Nova’s restaurant scene where the other of us had dined.  Al himself died in 2008.

Almost forgotten here and across the rest of the world but New Orleans itself is his telling, angry feud with vampire-illuminator Anne Rice over the gaucheness of his Nola Garden District restaurant(s) in a closed down car dealership on St. Charles.

Like the obituaries that used to be in the Times-Picayune, it’s an “Only in New Orleans’ story” of venom and malice carried to the grave.

[When Anne Rice battled Al Copeland in 1997: Bites from the Past | Entertainment/Life | nola.com]

Think Marie Laveau and voodoo [or voudoun, if you prefer]. Lyrics to “her anthem” provided by Ironton, Ohio’s own, Bobby Bare.

Whooooeee! Don’t get that lady mad — both Anne and Marie

Ignoring the feud when I entered the store,  on Popeye’s menu, and fast food was where Al really started hauling in the cash in the early 1970s, are beignets. Not sure if they have as much powdered sugar as the Cafe du Monde’s, but they certainly have a lot — and stuffing — strawberry in mine — too.

Proof is in the photo of the purchase.

So that’s St. Patrick’s breakfast. Console yourself it wasn’t Brennan’s with Bananas Foster.

What a busy day lay ahead for the Irish surnamed, there was the making of a dozen cup cakes topped with mounds of white icing and layers of green sprinkles, as ordered by grandson.  Faith and begorrah for the sprinkles.

Of course, they had to be hand-delivered in the gloom to the half-day elementary attendees AND working-from-home parents.

No rush to bustle home — corned beef lay to our left. The return trip meant stopping at the Celebrity Delly in Falls Church to begin the corned beef march through the day. On conscience had been pricked with an NBC4 report the night before on the struggle restaurants have had in Pandemic Year 1, Common Era.  The narrative came from the interview with Celebrity Delly, a favorite of ours for years.  Admittedly, we hadn’t been there since the lockdowns began.

For carryout, we took “Julie’s delight,” strip the pastrami off the image and you got it; that translates into corned beef, top with slaw and dressed in Russian on rye.

Thinking way ahead by a week, but losing the St. Patrick’s Day card that was bought at the same time, I had rounded up a tub of corned beef and cabbage [plus potatoes, couldn’t forget that in Ireland, and carrots] at our closest Wegman’s.

To be honest, neither of us — until we discovered Wegman’s, heat at 300 degrees for three to four hours, whole package three years ago — cared much for “the traditional corned beef and cabbage.” Voila, as the Irish would say if they spoke other languages than English and Irish.

Image of tub fresh out of the oven.

To top off the “traditional dinner,” shots of Jameson’s with four ice cubes; but alas, the bottle was nigh empty.

Image of Jameson’s distillery on Bow Street that I was corralled into in Dublin eons ago.

Never fear, the middle day could turn into  celebration of coming spring — Lillian’s second and done; grocery shopping [nearing the end of the milk supply; ice cream exhausted, veggies on the low side, fruit needed, and other odds and ends], that’s a two-fer in one place.

And for the final leaf in the three-leaf shamrock [read your Baltimore catechism to cement three, nor four in your head] would be — the ABC store, fill-up of Jameson’s.

Like clockwork, we swooped into Safeway, loading up the cart; Lillian broke for the vaccination line; gathering forces again, checking the list — had to do it twice; cleared checkout with a swipe of the debit card.

As the trunk was being filled, I plodded through a cold drizzle that would have made Galway proud, and into a second day without sun, to the ABC store as the clock neared 10:30.

For someone who grew up in Chicago where every conceivable business could sell beer, wine, alcohol of almost any kind from pre-dawn to well past midnight; and you could “buy the bar” to keep it pouring after closing hours and before the morning rush, the Cavaliers who control the liquor monopoly in the commonwealth decreed that Thursday openings happen at noon.

Lacking no place in the Washington metro area to have a true “Polish,” ala Maxwell Street before the University of Illinois got hungry for land to expand its Chicago campus and marry it up with the Medical Center, Wegman’s leftover corned beef.

Image of a classic Polish, though I could’ve ordered a “hot Italian,” but stayed that desire. 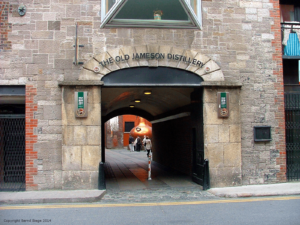 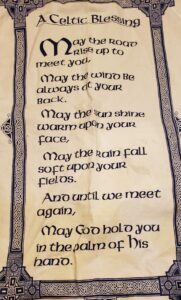