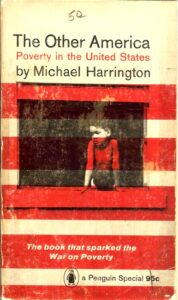 “This legislation is about giving the backbone of this nation — the essential workers, the working people who built this country, the people who keep this country going — a fighting chance” is what President Biden said as he was being handed a $1.9 trillion “stimulus package.”

Sounds like, “The Other America,” Catholic socialist Michael Harrington’s 1962 “J Accuse,” such a strong work that it even rattled the self-assured “Best and Brightest” “New Frontiersmen” inside the Kennedy White House  that all was NOT right in America.

Maybe beating Hubert Humphrey in the West Virginia primary wasn’t good enough to turn Appalachia’s fortunes around.  And don’t get the administration on race, we need Southern votes.

And no, I’m not raising another “plagiarism” cry against 46 — he had enough of those from law school rankings forward into de-railing an earlier presidential run.

So we can also forget, FDR’s New Deal or even his WWII Bretton Woods’ “social safety net” rhetoric.

Joe would have been an undergraduate at the University of Delaware when Harrington’s book came out and maybe it was assigned in a political science class he was enrolled in since he dual-majored in that subject.

[Was assigned Harrington in an Urban Sociology class I took at the University of Illinois-Urbana about the same time.]

“Other America” was such a different book than the usual American favorites of “self-help,” “motivation,” or the ever-popular PBS topic in fund-raising weeks “you’ve earned it; don’t lose it,” [Suze Orman, UI class of 1976, major social work, first book 1994]

Think Donald John Trump’s favorite — not ghost-written in his name book, Norman Vincent Peale’s 1952 “The Power of Positive Thinking;” GE’s Jack Welch’s 2001 “Jack Straight from the Gut,” although his multinational  quickly forgot his “gut,” now trading at $13.25; Spencer Johnson’s 1998 dealing-with-change “Who Moved My Cheese,” required reading in the Pentagon when Rummy took over; Stephen Covey’s 1989 “7 Habits of Successful People,” still popular — ever notice how many of these books use “seven;” and also dating back to FDR’s days Dale Carnegie’s 1936 classic, “How to Win Friends and Influence People.”

Contrast those titles — all looking toward “where’s mine?” to sample chapter titles from the original 177 pages of “The Other America:”

The Invisible Land; The Rejects; If You’re Black, Stay Back; Three Poverties; The Golden Years; The Two Nations.

Lyndon Johnson may not have read the book, but JFK’s brother-in-law Sargent Shriver had; and I can imagine LBJ towering over him, poking him in the upper chest demanding action, ala Robert Caro.

How does that story end?

The short-lived “War on Poverty” is defeated by the long-lived “War in Vietnam.”

Well now, “we have a president who cares about us” is the belief of many.

So one sub-chapter heading sums up the difference between Harrington and all those other books [and there are scads more like them] in this day.  We have sure as hell seen that “Reaganomics Trickle Down” theories don’t work.

“Poverty is expensive to maintain.”

Or as we enter Plague Year 2, Common Era, here is a Harrington thought applicable now.

“The poor get sick more than anyone else in the society.  That is because they live in slums, jammed together under unhygienic conditions;  they have inadequate diets and cannot get decent medical care.  When they are sick, they are sick longer than any other group in society. …At any given point in the circle, particularly when there is a major illness, their prospect to move to an even lower rung and to begin the cycle round and round, toward even more suffering.”

I would only add with COVID-19, add DEATH  to the circle.