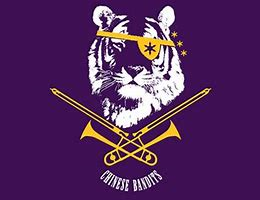 LSU’s Roar of Victory, But Can Anyone Speed Up the Closing Last Seven Minutes of a Half?
When I was barely in my teens, I couldn’t shake the images of the “Bayou Bengals” and its “Chinese Bandits” [usually defense] that I read about in the sports sections from the papers that we subscribed to.
Bayous– swamps? Bengals — tigers, of course!  Chinese bandits — Terry and the Pirates, one of my favorite comic strips
All that and the lore of legendary college football existing in one exotically-named place — Baton Rouge.
I lived in Chicago, so rarely, if ever, did I see LSU play  — except possibly in black & white bowl games; sometimes “big showdowns” were carried on radio, so I could have heard those broadcasts — like Billy Cannon’s “Halloween Run” against the Ole Miss Rebels.
But I read about their games — long accounts from the wire services right beside the Fighting Irish, the Fighting Illini, The Badgers, and Wildcats, not the one or two graph nuggets in today’s Sunday papers for non-local games.
Turning to last night’s game, in particular, but looking at a real clock versus a game clock generally in either a college or NFL game, the last seven minutes of a half can be interminable.
TV timeouts for commercials, each coach using up all his allotted timeouts — usually five left between the two sides, injured players requiring attention — from cramps to being knocked senseless [as well as at least one phony act to stall a drive or whatever], incomplete passes, players running out of bounds, penalties — most often offensive holding or defensive pass interference as time is running down and reviews of everything from spotting the ball to first downs to touchdowns to turnovers to possible ejections. In the NFL, add the two-minute warning before the half; in college allow a few seconds after each first down to move the markers and the officials set up while the clock is stopped.
With slightly less than seven and a half minutes on the game clock in the first half last night, more than twenty minutes of real time were consumed to take less than three minutes off the officials’ time.
Baseball is slow; football can be moving at a snail’s pace.  Go to a televised college or NFL game and record for yourself the amount of dead time in the game.
Expect the 60 minutes of playing time to take between three and a half and four hours [figuring 20 minutes for a half split, extended for bowl games and NFL playoffs for commercials and televised acts]
60 minutesbaseballBayou BengalsChinese Banditsclockcollegegame timeNFLspeedtime