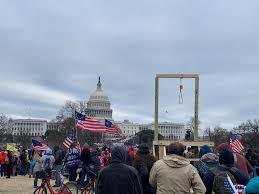 “Let us now praise famous men AND our fathers that begat us. …eloquent are their instructions”

[Ecclesiasticus 44.1 with a touch of .4, King James Version]

Never let it be said, the  “Daddy Party” doesn’t have a few faint-hearts to beat their breasts in public repentance, even after a “bad day for Trumpism” — double loss in Georgia, failed coup at the Capitol.

David Kochel, “long time Republican consultant in Iowa,” is quoted in the Washington Post as saying “We can’t continue to have an outrage industry that feeds all this.  The best way to put out this  sort of dumpster fire is to deprive it of oxygen.”

Named and unnamed, they claimed to be charting a “new way forward,” a phrase that should be thrown into — another old  saw  — “the dustbin of history” for the “Grand Old Party.” [Cite for “dustbin:” 20th century  Soviet Revolutionary Leon Trotsky paraphrasing “Italian,” though not unified as a nation in the 14th century, Francesco Petrarch].

From the grandest of heights, a scant nine years ago, then RNC chairman Reince Preibus, of beloved recent memory until he was Tweeted out of his White House office — an early “guard rail” break, boasted after that Republican in Name Only’s 2012 defeat [dare we write his name — Mitt Romney] that the party’s “message was weak.”

Adding for eyewash, “we weren’t inclusive.”

Here was the “autopsy” that led to Donald J. Trump, the “I alone” guy — name your ill, hate, whatever, becoming president.

Inclusive, schlusive.  Purge the rolls, shut the polls down in a plague, rig the districts.  That’ll get the job done.

As always, every news story in 2021 print, online, or on air that premises on:

“GOP grapples with its future” [Christian Science Monitor January 9] is worthless.  The path the follows has been well-trodden, trees marked with chops, bread crumbs.

Far more to the point of “whither the Republican party” was the sheer, simple eloquence when she heard 45’s voice being pumped into the RNC conference this week

“I love you!” Which then prompted choruses of “We love you!” from the multitudes at the resort.

When it comes to the Republicans in my lifetime — dating to FDR, their “fever never breaks.” It wasn’t Lee Atwater, wunderkind from South Carolina in Pappy’s run for the White House, who conceived the “Southern strategy.” As others before him in the Nixon campaigns, young Lee only saw ole Strom Thurmond’s winning 39 electoral votes in 1948 on the Dixiecrat — Segregation now, Segregation forever [stealing from George Wallace’s much later Alabama inaugural] –as the “heavenly road” to success.

Each time, Republicans  “examine their [political] consciences,” and say as Chris Christie did referring to 45’s “wild” and “never concede” cheerleading of the “Save America” mob, “I don’t think the messenger can recover from yesterday [or the date of whatever debacle or depravity happened],” these “wise men” — almost always male — have no idea how deep into the apocalypse millions of the “I love yous” are.

The “Trump patriots” believe with all their hearts — especially the evangelicals [putting Catholics in that crew too] that 45 and they will have a “GREAT VOICE into the future.” It wasn’t just “Trump 2020,” “Fuck Biden” and Confederate flags they were carrying. The thin blue line on a white sheet for “Blue Lives Matter” while hundreds are screaming “traitor” at the Capitol Police who aren’t opening the fence to let them up the steps; and the bravest of those souls using a fire extinguisher to bash in the skull of a cop who wouldn’t stand aside once the “patriots” were inside.

For the most faithful, they carried their “Jesus Saves” flags onto the Capitol grounds, around make-shift gallows with nooses and a few with effigies. There were  “hangmen” already inside hunting down traitors — Pence and McConnell, topping the list, then the true scum — Pelosi and Schumer, coastal elitists.

My prediction, two years from now, there will be dozens of Republican candidates running for all manner of offices on “I liberated the Capitol”  — if “stormed” works better use it, Jan. 6, 2021.  That will be their campaign badge, brandished like a “veteran’s” record in uniform, the new DD-214. [Can’t wait for the lapel pins for the country-club set and tee shirts for the rest.]

We already know there were state delegates present — at least one taking an early tour of the Capitol, elected local officials — county and lower.

As David Bossie, of Citizens United, yep “those free speechers,” from Maryland, of course at Amelia Island, told the Post about the future of the party with people like that, “You don’t have to throw out everyone when there is nothing fundamentally wrong.”

That’s “THE BASE,” said with breathless appreciation.

If any  Republican wannabe officeholders needs an example of future success in the politics of “outrage,” let them follow the parvenu of 2013, the most junior senator from Texas. Ted Cruz shut down the government — singlehandedly.  He was yelled at by his far more seniors then; and yet there he was three years later, the last Republican standing before 45 and rubbing his hands together for 2024.

And now, he and Josh Hawley of Missouri, are being denounced for their constitutional right to question the integrity of the 2020 election.

“Blowback,” what “blowback.”  Already, the RNC has proclaimed itself AGAIN as the “party of law and order” [ignore the shit on the walls of the Capitol” at its Florida meeting. Better yet, “‘speaking on the condition of anonymity” told reporters “antifa” [pronounced Ann Tee Fa or if you like Anne T. Faw; crucial head down — in the sand, if possible, and hit that tee hard like on the driving range] and all others they hate.

The Republicans shouldn’t fear what happened Jan. 6.  Hey, with only a four-year hiatus in holding power after Nixon’s resignation, Watergate, there was the “shining City of a Hill guy” in early August 1980 at the Neshoba County  Mississippi fair, delivering an empassioned  “state’s rights speech.” You’ve been “redeemed again;” put Chaney, Goodman, and Schwerner back in Magnolia State mud like they were sixteen summers before.

We’ve turned the page.” Got that right — no more judges like Earl Warren!!!!!

As Mo Brooks, the “conscience” of Alabama and the House’s first and loudest objector to “certification,” tweeted now that 45 has been “silenced:”

“Again, don’t rush to judgment, but evidence below is not distributed by major #FakeNewsMedia. Investigation & time will divulge truth. #BLM & fascist #ANTIFA supporter arrested for role in Capitol assaults, “standing next to” killed Trump supporter.”

What more proof do we need. Those BLM’ers and “fascist ANTIFA supporters” are everywhere.

Plus the “lamestream media; don’t forget them” when it comes to the gallows.

And so, when this revs up to its new crescendo — watch those Park Service permits for January 17 to 20 and more “Save America,” “Stop the Steal,” “Fuck Biden,” “Stand with Trump” rallies in the nation’s capital, we know who to blame.

Oh ye, of little faith, let’s go back to Ecclesiasticus for guidance [and not that ill-kempt unintelligible Bob Dylan as translated by a drug-induced gang on “every season.”]

“Let us now praise famous men AND our fathers that begat us. …eloquent are their instructions”

45, Cruz, and Hawley are the [current] fathers — in the Senate. [Can’t you just hear “The Jeffersons” theme — “Moving on Up”, incongruous as that may be, when you know with your heart that Kevin McCarthy — “I Dream of Speaker” and Steve Scalise, gunned down on a softball field but firmly attached to that most important Right — guns,  seeing themselves “moving on up in taking over the House in two years.

The only question is how “eloquent” will be “their instructions” to the true believers, the good people, the patriots of tomorrow from “heroes of the Republic,” like Devin Nunes, Tommy Tuberville, et al. There are hundreds more in the wings waiting to take office [by hook or crook], and potentially millions more on “social media.

“Patriots” one and all, Liberators of the Capitol aren’t done “begatting.” More medals and lapel pins can be passed out for actions in the coming days.

To me, there is no bottom to the abyss in being the “party of outrage.”