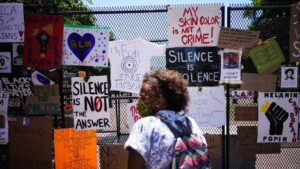 In America, from colonial times, “skin color” was a potential crime.

Signs being carried around Lafayette Park in Washington and posted on the eight-foot high fence keeping people from the People’s House comparing police to slave-catchers may have seemed outrageous and something out of Harriet Beecher Stowe’s “Uncle Tom’s Cabin” or Colson Whitehead’s “Underground Railroad.”

But you can forget fictional bounty-hunters coming to the North looking for runaways after the passage of the 1850 Fugitive Slave Act. Or the two-paragraph explanation of the “Compromise of 1850,” if that’s taught any more.

Sally Hadden’s “Slave Patrols, Law and Violence in Virginia and the Carolinas” is a nearly 20-year-old classic eye-opener.

After “Nat Turner’s Rebellion” or de-fanged as the “Southampton Insurrection” of 1831 in the press and histories of the time, the truth is in the slaveholding states — “patrols,” organized directly under the county boards or court or indirectly under the sheriff “policed” specified areas in their locality. For years, certainly after escape plots or armed revolts were uncovered and crushed, colonial and state legislatures recognized the loose “constabulary” of all white males being required to enforce the laws covering slaves’ behavior and presence had proven less effective than required yearly “militia musters.”

Enforcing the “Black Codes,” made more stringent after Turner, the Virginia “patrollers’ were paid employees of the locality. They rode county roads at night, demanding “passes,” “manumission papers,” or “proofs of freedom,” etc., from slaves or free African-Americans they came upon; enforced curfews; break up gathering of usually five or more black, and were given the authority to enter their dwellings [and whites’ dwellings who were suspected of harboring runaway slaves] without warrants. The patrollers under “captains” had the power of arrest, and they used it.

In small localities, say Charles Town, now West Virginia, the town’s sergeant was given those powers. That courthouse was still reeling from John Brown’s raid, trial, and execution when the ordinance was passed in 1860. Included was a section that read no more than “five negroes shall at one time stand together on a sidewalk, or at or near the corner of a street, and negroes shall never stand on a sidewalk to the inconvenience of White persons having to pass by.” Like violating curfew, the punishment was up to fifteen stripes.

Black CodescolonialColson WhiteHeadcourtmilitiaordinancepatrolsSalley HddensergeantsheriffslavesstateUncle Tom's CabinVirginia
Share This
RECENT POST
CONTACT
703-250-4869
john@johngradynowandthen.com
If your organization is interested in having John speak at your event, please call: 703-250-4869 or email john@johngradynowandthen.com
CONTACT JOHN
© Copyright 2018 | John Grady | All Rights Reserved | Site by d2dcreative.com
Back To Top
×