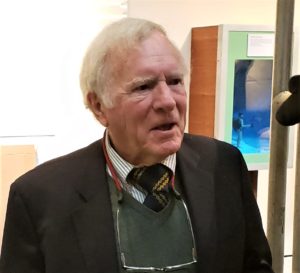 Retired Navy Capt. Don Walsh, who piloted bathyscaph Trieste to the bottom of the Marianas Trench, 200 miles off Guam, 60 years ago.

Walsh, a retired Navy captain, was the sea service’s “Submersible Pilot #1” in piloting Trieste to the bottom on the Mariana Trench, seven miles below the ocean’s surface 60 years ago today, Jan. 23. It was a dive to test the vehicle’s safety and reliability, not a scientific mission.

Trieste and the upside down steel “balloon” that it was attached to was “not designed to survive wind and waves.”  The “balloon” was filled with aviation fuel to give it buoyancy. But in an earlier dive, Walsh and Jacques Piccard, a Swiss scientist, could hear a loud cracking noise coming from the rear viewport that if it didn’t hold then they would be dead or, if it couldn’t be repaired, the mission was over.

At night, “out of sight of our masters” and Piccard, the repair was made — in some cases uses fixants from an auto supply store and an improvised “battering ram.” Alvin was the follow-on to Trieste as a deep submergence vehicle and was far more maneuverable than bulky Trieste.

The National Museum of the United States Navy in the Washington Navy Yard has opened an exhibit on the service’s underwater exploration activities. I had the pleasure of interviewing Walsh for about 90 minutes Jan. 22 about his career in and out of the Navy. Piccard died in 2008. And yes, the character Piccard in “Star Trek” is named for his father, a well-known scientist and inventor in the early and mid-20th century.