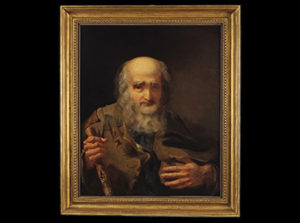 And We Ain’t Doing Much Better Now

“America’s First Veterans,” the exhibit at the museum at Anderson House, the headquarters of the Society of Cincinnati, on Massachusetts Avenue NW, is a grim reminder of the nation’s historic and pathetic treatment of the men and women who have “risked their lives,” as is often said and is true, for their fellow citizens.

Here’s what you can learn with a tour of the very telling exhibit.

If a soldier in the Revolution survived and was mustered out in good health, he got at best a “thank you for your service” tip of the hat. There were no pensions for that person, nor was there a Veterans Administration in 1783 when the Treaty of Paris was signed to make arrangements for home loans or health care, coordinate with the Department of Education [wasn’t one of those either] for training or Department of Labor [ditto that] for job hunting or Small Business Administration [bingo, didn’t exist either] for a loan to open your own smithy.

The still injured and those crippled by disease and wounds when discharged were “brushed off” in the same manner and at the same pension rate as the British soldiers of the crown. [What other model could the Founding Fathers follow? Re-invent the wheel? Certainly not!]

To say, as the once healthy men aged, or their earlier wounds never healed properly, their conditions worsened physically, often economically, and mentally. It wasn’t until the 1830s that Congress voted to extend pensions to all survivors of the war. They took a baby step to aid the desperate circumstances veterans in 1818 [means testing, no free handouts!] [Do the actuarial tables in say 1830 for the quarter million who served in the Continental Army. Not a lotta guys left, so not a lotta money out of the Treasury. Didn’t like “entitlements” then. Hate “entitlements” now.]

The following quote comes from an 1836 letter Michael Bedinger in Kentucky sent to his brother Henry living in Virginia, but is not in the exhibit. I came across it doing research for a book that involves one of their descendants.

Both Bedingers were members of one of the first ten rifle companies in the Continental Army. Both survived the war: Henry as a POW for years in a hulk in the waters off Manhattan, and Michael fighting on the eastern front with George Washington and in the Ohio Territory with the likes of George Rogers Clark.

They may have been as “veteran” as men can get. At it almost continuously from beginning to end.

And yes, both served in Congress, long before the “relief” acts were passed.

When the letter was written, they were the last survivors of their one-hundred man rifle company that made the “Beeline March” in 1775. A decade before, there were six.

“April 4th. I have just received yours of the 28th.

My dear Brother I thank you and feel as greatful to you as if I had got a pension for all my hard and dangerous services, but rather than receive a trifle I will take nothing.”

The letter was written more than 60 [repeat SIXTY] years after they marched from Virginia to Massachusetts, eleven months before the approval of the Declaration of Independence.

Flash forward to today and remember there are more than 600,000 male and female veterans of the Afghanistan War alone in the new equation of “caring for veterans.”

So what are we seeing?

Uptick in veterans’ unemployment — blame it on coronavirus or “seasonally adjusted”, but it’s there;

continuing problems of homelessness and suicide [never went away, although victory has been claimed several times in the modern ”war” on both];

dysfunction in the VA health care system that raise shades of the 2007-2008 catastrophes in the military’s system [sidenote: privatizing some more elements of the VA system ACTUALLY may help] ;

and the never-to-be-solved in any person living-at- this- instance’s lifetime, despite billions thrown at the problem for two decades — and billions more on the way, a compatible electronic records system between the VA and Pentagon. The phrase “immense challenge” echoes through the House and Senate offices’ hearing room down through the ages in testifying on “compatibility” and will be the mantra for the future questions of “why is this?”

Sounds very much like Michael Bedinger’s letter to his brother.

Or their compatriot Winter, a weaver from Bethlehem, Pa., “a lone wanderer in a world evincing but little feeling or sympathy for him.”