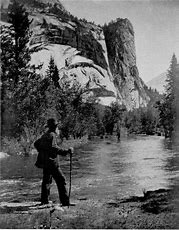 So I’m back from about an hour trekking through the subdivision  on another 90 plus  degree day.

To say, I was sweating would be understatement although I was back inside by 8:30 in the morning. Before getting back to book work and a Naval Institute assignment, I checked the Post website and found the Sierra Club re-assessing John Muir and his racial attitudes.

Several days earlier, I finished Andrea Wulf’s magnificent book “The Invention of Nature, Alexander von Humboldt’s New World,” published in 2015.  And no, on the subdivision walk today, nor the one through George Mason University’s always under construction campus earlier, I was not taking in flora and fauna.

My idea was keep walking, a pandemic PT test. It was not a dissection of subdivisionscape.

What I stumbled across as the book was ending was von Humboldt’s influence on John Muir.

And lo and behold, unbeknownst to me was Muir’s connection to Indianapolis, “Circle City” in the words of many of ours one-time local newspaper.  After his draft-dodging time from the American Civil War in Canada, selling rakes and brooms to get by, our man Muir — before his Yosemite days and well before my trips there and other parts of the Sierra — came to Indy.

John “Of the Mountains” Muir in the flatlands!

Found himself a job as engineer and foreman at a hub and spoke manufacturer at 230 S. Illinois Street, trying to get together enough money to walk in von Humboldt’s steps. If only I could remember the name of the saloon on South Illinois a number of Fort Ben denizens were directed to,  but ….

Von Humboldt walked, walked, walked over thousands of miles in South America and Russia [big time in Siberia]; climbed, climbed, climbed up hundreds of mountains in the Andes, the Alps, and Urals. All the time he was scooping up plants, taking cuttings from trees, measuring altitude, gauging temperature, blueness of the sky — during the day, and at night recording astronomical observations , plus drawing and writing in his journal[s], fill one and move on to another, hoping he doesn’t drop it in a river, have it fall off a cliff, or be lost in transit.

And von Humboldt talked like that in run-on sentences in several languages — at once. His writing, praise the Lord, at least in the English translations I read, was far more graceful.

Muir, who was born in Scotland, proved to be an efficiency expert in the Indianapolis plant, but an industrial accident  blinded him for months in one eye.  The accident of Muir’s own doing  caused him to put on the shelf his immediate plans to flee the city of our wartime years for the Amazon and spend years recording his findings, ala the Prussian.

Turns out, like hundreds, maybe thousands of natural scientists then, Muir was a von Humboldt disciple.

As Muir recovered he became lifelong friends with Catherine Merrill, she of the Bobbs-Merrill publishing and other Indiana enterprises family, thus keeping the Naptown connection alive for us.  She had served as a volunteer nurse for the Union Army during the war.  She cared for and read to Muir during his convalescence.  She later became one of the earliest women to be named a full professor at an American university — needless to say it was in Napton, now known as Butler “Our Bulldogs” University.

If von Humboldt walked, so did Muir — with sight restored.  In 45 days, he  walked across Indiana, Kentucky, Tennessee, Georgia [hi Bates’es], and Florida, where he came down with malaria [figures, COVID-19 wasn’t around at the time].

Muir’s comments on Native Americans came after this trip, as the Post story recounts. His comments on African-Americans were recorded later.

And no, after recovering — a word that occurs often in Muir’s tale — from that illness, he didn’t walk to California to check out El Capitan and other sights nearby, Muir took a steamer to Panama, a railroad from the Atlantic side to the Pacific, and another steamer to “Baghdad by the Bay.”

And then into the Sierra. Needless to say, the club came later.

If we had only known then, in Bohemian Broad Ripple we could have been filled with wondrous tales linking the cleansing of Fall Creek as Muirian, late breakfasts at the Huddle House as seminars in ecology, wanderings in Brown County as flora and fauna expeditions, not to mention the anthropoligcal insights gathered at the Bean Blossom Festival.

But our [at least my] ignorance when assigned to Fort Ben didn’t cause us to have to switch course of Muir’s legacy either — ignorance is bliss.

Then again too, in our favor, we didn’t erect a monument to Muir either in Lawrence or dead center of Indianapolis either.

“So it goes” — stealing from a Hoosier, who requested anonymity so the family’s hardware store could stay open during a plague year — in the Flatlands.

draft dodgerEl CapitanFort BenIndianapolismountainsMuirvon HumboldtwalkYosemite
Share This
RECENT POST
CONTACT
703-250-4869
john@johngradynowandthen.com
If your organization is interested in having John speak at your event, please call: 703-250-4869 or email john@johngradynowandthen.com
CONTACT JOHN
© Copyright 2018 | John Grady | All Rights Reserved | Site by d2dcreative.com
Back To Top
×