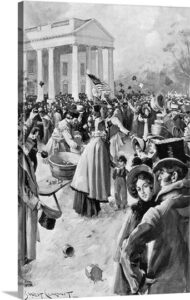 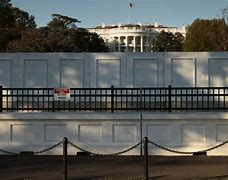 “The People House” in March 1829;
“Are You F…… Insane, People’s House?” starting June 2020.
So remember when Steve Bannon was the “Grand Wizard” of 45 strategy. Yep in those days, before being fired by Dear Leader and years before his “We Build the Wall” fiasco, he proudly put Andrew Jackson as the A-No. 1 example to follow when sitting behind the “Resolute Desk” wielding Sharpies with reckless abandon.
When “Old Hickory” swore the oath, in came the job seekers. They were throwing down the whiskey, cider and whatever else ready to fill post offices, treasury clerkships, the auditors in the Navy and War Department. Mobocracy of sycophants looking for a sinecure.
Throw the doors of the White House open for a week of drunken partying — end of the “Corrupt Bargain.”
But today, we have only “sick-ophants” like Mark Meadows, testing positive for nothing more serious than a mild dose of flu in what is likely his view and then “hush-hush, sweet Charlotte” to the world. Throw up the barricades, can’t have a repeat of the monumental battle of Lafayette Square.
You remember that highpoint of the administration’s domestic policy.
“Dominate the Streets — Dominate the Battlespace!”
Immortal, inspiring words; makes me feel part of a “Band of Brothers.”
So now, as the days have grown shorter, let only the fattest of the fattest fat cats inside the barricades [kinda makes you want to hear the score of “Les Miserables”] for the re-coronation.
Come one; come all, with the check book — bank transfers perfectly acceptable.
The trough shall be full again. [Any of you boys and girls at the re-crowning losing your taste buds, mild fever — asking for Chris Christie, onetime “Jersey Boy” himself. Just checking.]
If 45 couldn’t have a “trail of tears” force-marching each and every Native American the states and feds could lay their hands to somewhere west of the Mississippi, well how ’bout a Muslim ban!
Right from the “git-go” in the Hall of Heroes in the Pentagon.
Yessirree, Donny, do it right there where the armed forces honor their Medal of Honor recipients. And when an election is bearing down and you need more “red meat,” although Steve is out of 1600 but looming like a pall, follow those instincts — resurrect those trenchant descriptions: rapists, drug smugglers, and narco-terrorists on the march.
Stop the “caravan” in its [aka La Bestia or Murder Train, take your choice] railroad tracks.
And when that fails, throw the pre-schoolers in the cooler; keep ’em there, out of sight, out of mind.
Of course, the “Grand Wizard” was long gone from the area in front of “Black Lives Matter Plaza” when the greatest Executive Order in the Jacksonian mold was Sharpied [new verb].
Make all senior GS’s who do “policy” part of government subject to the “spoils system.” The Jacksonians are dancing in the streets.
“Fire at will” with a gun on Fifth Avenue if the occasion arises, No more Faucis, naysayers and whistleblowers; and by the way Birx, nice scarves. “Deep Staters” one and all.
As the saying goes, honed to perfection under Jackson, “to the victors, go [or belong, if you like] the spoils.” And let me at ’em — drilling rights; Warp Speed vaccines; wilderness, schmilderness.
Makes me one “Proud Boy” to have seen the “American Carnage” that one swipe of the pen did.
But hey, it was all in the keeping with Kellyanne Conway’s summing up the incoming administration’s view of “law,” like the Hatch Act — limiting political activities of federal employees — including appointees, ignore it because no one’s gonna be coming for you and place your “order” now less than two months in.
“Go buy Ivanka’s stuff!”
Come January, bye-bye, Ivanka!
45BannonbattlespaceBirxBlack Lives Matter PlazabrothersChristieConwaydominateDonnyFaucigrand wizardHatchIvankaJacksonlawOld HickoryorderSharpiedspoilsstreetswarp speedWhite Housewilderness