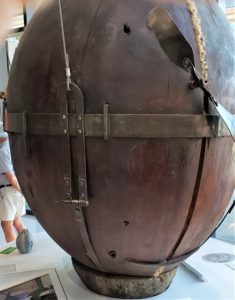 Went for the first time to the Spy Museum Sunday — missed its stay near the Portrait Gallery, but was welcomed just inside the entrance to its new location on L’Enfant Plaza by a replica of David Bushnell’s Turtle, America’s first submarine, turned loose on the Royal Navy during the Revolution, but without success. The Confederate’s Hunley was not a pioneer in this effort to ward off a more imposing fleet. Bushnell’s family played a critical role in selling the Union Navy and John Ericsson’s design for its first ironclad, Monitor.

Across from this first serious attempt at American naval guerrilla warfare in the museum and shielded by a staircase from damaging sunlight was James Bond’s Aston Martin, premiering in 1964’s “Goldfinger.” Yes, with its machine guns, tire-slashers [updated Ben Hur chariot device], bullet-proof shield, etc., it was and is the perfect car for commuting.

Although a for real “Blackbird,” Lockheed’s “Skunk Works” version of its spy plane for the Air Force, is at the Smithsonian’s Dulles facility, there are panel’s explaining what Kelly Johnson had wrought. A spy plane that flew sub-space, a minimum three times the speed of sound, with incredible imaging technology by Kodak for the mid-1960s. Also something of a “hangar queen” — many hours down between flight for maintenance. Welcome to Beale Air Force Base, Calif., halfway between Sacramento and Reno. Oh yeah, you could also catch the SR-71s at Kadena in Okinawa and in Great Britain.