For more years than I remember, Lillian and I have trekked to the National Gallery of Art, West Building between Christmas and New Year’s. In the not so distant past, that was the first stop of a pilgrimage if not to Jerusalem, Mecca, Canterbury, Lourdes, or Fatima, it at least took us morally incorrect commuting tourists to the National Cathedral [free then, pre earthquake and love the catacombs], the Basilica of the Immaculate Conception [Babe Ruth has a plaque near the lower church although the Irish chapel  to Mary is a personal heritage favorite], and in more recent years the nearby Franciscan Monastery of the Holy Land in America[love the gardens even in winter].

No, we weren’t attending mass or services — obviously that wouldn’t be the case  with the museum. Viewing the El Greco exhibit didn’t count as church attendance in 2014 in anyone’s books. This is true despite the number of high-ranking clergy who could afford his rates in their part of the Spanish imperial orbit and displayed that year.  It was a world without end. [See historian Hugh Thomas’ work for proof. The empire  extended from the western tip of Europe to  the Americas to the Philippines to toeholds off China and India [these toeholds, courtesy of the Portuguese] and back to Europe.

We were there to see the exhibits, Vermeer and friends and rivals this year, — huge, long lines, more than half the length of the building when we were there. To borrow Simon Schama’s title, on 17th century Dutch imperialism, for the museum it was an embarrassment of riches  in attendees. Kudos for the bamboo in the museum rotunda this year for the seasonal decor, the second reason to hit the museum.

And, the big AND … to buy discounted religious-themed, very tasteful Christmas cards. [P.S. not available on the NGA gift shop website].

And, believing in the separation of church and state, some seasonally-themed,  non-religious tasteful cards for non-Christians to be mailed in the coming year.

Yes, we are the ancien regime, cards ,not pictures of the family or pets [please at least ID the people and animals in those substitute offerings — it’s not that hard].

Even more retrograde, we include a letter — limited to one page, always done by Lillian first for “her” list and then tailored to “my” list.  “Our” list gets her letter.  Her years of teaching make  for beautiful cursive in the signing of the joint cards.

We often personalize the cards — not with a signature, though we do that with my horrible penmanship, but with comments about matters not covered in the letter that applies to that person or family.

To be very frank, the cards at the museum are better than the ones found in “card stores”, grocery and drug stores and big boxes.

What we have noticed is a serious drop-off in not only traditional cards, like we send, and certainly letters, but even in the family picture variety.  It is kiboshing a tradition attributed to a career civil servant in the British postal system during the  mid-1840s as a way to encourage more people to use the system.

Look at those days as the halcyon times of the president’s “Merry Christmas”.

Victoria had just become queen of the United Kingdom — Great Britain [on one side, having already gobbled up Scotland and Wales] and Ireland [on the other — really the Anglo-Protestants there, like the heirs of Arthur Guinness].

More to our sentimental journey into Christmas past,  Charles Dickens had published his “Christmas Carol” and “Scrooge” was a household name.

N.B.: The American Hall brothers got in the card business in 1915, so technically they are off the hook, as are Currier& Ives, the great lithographers of the Civil War for this outburst of exchanged greets during the darkest days of the year — Northern Hemisphere, version.

I really have almost no interest in receiving presents [although I have no trouble giving them] and  haven’t for years before I was married in my early 30s, either for my birthday or Christmas.

Christmas cards, particularly tasteful ones, religious or secular, I love.  As diminished as the returns have been, the quality of  the cards received has risen [or maybe there are more au pairs of the ancien regime sending so the junque was never bought, never stamped].

I am presuming the decline in raw numbers will continue next year — postal rates are rising.  USPS is going to be stuck with the seasonal forevers — Madonna and Child included — for this year.  Won’t be allowed to sell them  after Jan. 1 at the old 49-cents rate.  First class goes to 50 cents with the new year.

As to the whys  we ditched the cathedral, basilica, and monastery:

The cathedral’s card offerings in selection and quality deteriorated more quickly than its financial problems rose even before the quake. It was the beginning of a downhill slide along the slippery slope of money woes.

The basilica never really had strong offerings to begin with, mawkish in my view like drawings in old catechisms,  and discounting was minimal.

The monastery gift shop had far more interesting things than cards [if you like creches, it was a first- rate source].

Alas, the other factors were all too familiar to all who live here: having to drive, find parking, deal with traffic cameras [32 in a 25 mph zone ticket in my case].  Metro rail stations are not close to the intended visiting sites.

Although traffic volume is down during that week, getting around here can be a pain in the butt, at the best of times, a damper on the spirit that Dickens was trying to sell.

So we have retreated to the secular, government-controlled [dark state] subterranean — actually street level displays. While to these eyes, the rotunda’s trees, poinsettia, greens, and bamboo looked great this year, the remainder sale of religious-themed cards was disappointing.

The museum had only three distinct offerings midway through the Christmas-New Year span.

The choice was obvious.

Short Metro rail ride to parked car. Longer drive for morally suspect commuters on Shirley Highway at 3:15 p.m., but our card tradition — the ancien regime — will live on — certainly for another year. 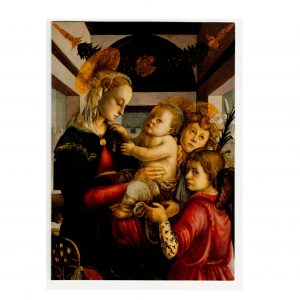